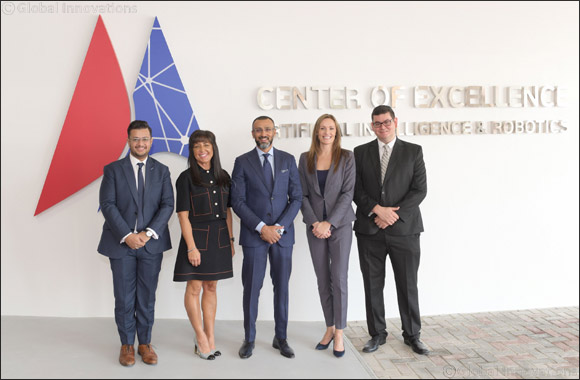 Share Home >> Education & Training
In line with GEMS Education’s future-focused approach to learning and driving innovation, the Center of Excellence for AI and Robotics will promote and deliver outstanding future technology learning experiences for students
Dubai, United Arab Emirates, January 30, 2020:   GEMS Dubai American Academy has announced the launch of its new Center of Excellence for Artificial Intelligence and Robotics. The establishment of this Center is a response to the rapid rate of technological and societal changes in today’s world and aims to drive the changes needed to ensure current models of education remain relevant to the dynamic nature of industry.
The vision of the Center of Excellence is to promote educational and research activities in the field of AI and Robotics. It bridges the gap between businesses and educators with a distinctive capability to harness the intellectual energy of the academic world with state-of-the-art AI and robotics technologies.
GEMS Education undertook the initiative to strengthen the country’s AI and Robotics ecosystem that will serve as a platform for intelligence-sharing and technology collaboration in the cutting-edge areas of AI and Robotics.
Tammy Murphy, Superintendent/CEO, GEMS Dubai American Academy, said:
“Preparing students for the future means having them engaged in technology through hands-on activities. With the launch of the new Center of Excellence for AI and Robotics, we provide students with the tools and conceptual frameworks to engage with AI-enabled technologies. At GEMS Dubai American Academy, we realize that everything we love about civilization is a product of intelligence, so amplifying our human intelligence with artificial intelligence and robotics has the potential of helping civilization flourish like never before.”
Sreejit Chakrabarty, Director of Robotics & Artificial Intelligence, GEMS Dubai American Academy said: “The Center of Excellence is founded on the research that 65% of the jobs needed in 10 years’ time do not exist yet. The Center of Excellence for AI and Robotics will ensure students are fully equipped with the skills, expert guidance and grasp of emerging technologies required to prepare them for a radically changing world as well as for jobs of the future.”
The GEMS Dubai American Academy Center of Excellence has a range of cutting-edge technologies such a Mixed Reality Zone featuring Virtual Reality (VR), Mixed Reality (MR), and Augmented Reality (AR) manufactured hardware from Facebook, Microsoft and HTC, with software like Unity 3D. The Center also features a Self-Driving Car, an autonomous customized Renault Twizy fully electric car.
In the Robotics segment, the Center showcases the Baxter Robotic Arm, a collaborative research robotic arm, capable of advanced facial recognition and machine learning using industry grade ROS (Robot Operating System) and Python coding; and Assembly Line Robotic Arms, a Dobot Magician robotic arm industry 4.0 setup, mimicking an assembly line using varied end effectors such as grippers, suction cup as well as laser engravers.