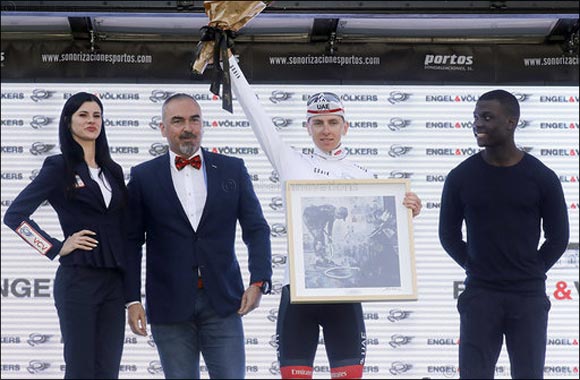 Share Home >> Entertainment
Kristoff 4th in final sprint in Valencia as Pogačar takes overall
Dubai, United Arab Emirates, February 10, 2020:  After a winning display on stage 4 on the steep climb to Altea, Tadej Pogačar has cemented his victory in the Vuelta Valenciana (2.1).
With a relatively short final stage of 97.7 kilometres, it was destined to be a day for the sprinters. In the final kilometres UAE Team Emirates were active at the front with even race leader Pogačar pulling on the front in support of Alexander Kristoff. Fabio Jakobsen (Deceuninck Quick Step) proved quickest in the dash for the line with Kristoff just behind in 4th.
This result from Pogačar marks the 7th victory of the season for the UAE squad who will now turn their attention to the Tour Colombia 2.1 which gets underway on Tuesday 11th February.
Director Sportif Neil Stephens was quick to pay compliments to the team and to Kristoff who played a key team role during the week and will now look towards the classics.
Neil Stephens DS: “It was a relatively quiet day today. Deceuninck and Jumbo Visma controlled the finish to set it up for a sprint. As far as we were concerned our priority was looking after Tadej and then in the final few kilometres we tried our best for Alex in the sprint. It’s been a tough week for everybody especially Alex he’s been sprinting in the sprint stages and working in the mountain stages and even though 4th isn’t a stage win he’s in good form it’s a positive sign heading into the spring classics. As far as we’re concerned it’s a great start for the team in Europe, there’s a really good vibe in the team and we’re looking forward to more and bigger challenges in the future.”
Pogačar :“ This win means a lot to me, especially after all the hard work we did in the winter to prepare. To start my first race and win is incredible, my form is really good – not as good as when I was in the Vuelta a Espana obviously, but the season is still early. My first big goal of the year will be the UAE Tour at the end of this month before building up towards my first Tour de France.”
Kristoff: “It was a good week for the team – we won two stages and the GC so we can’t ask for more. For me it was also a good week, I felt quite strong on every stage and I was competitive in the sprints. I took a 3rd and a 4th, for sure I was aiming for more but I take confidence heading into my next race in Clásica Almería.”
Stage 5 Results
1. Fabio Jakobsen (Deceuninck Quick Step) 2h04’32’’
2. Dylan Groenewegen (Jumbo Visma) s.t.
3. John Degenkolb (Lotto Soudal) s.t.
4.Alexander Kristoff (UAE Team Emirates) s.t.
Final General Classification
1. Tadej Pogačar (UAE Team Emirates) 18h43’00’’
2. Jack Haig (Mitchelton Scott) +6’’
3. Tao Geoghegan Hart (Ineos) +6’’