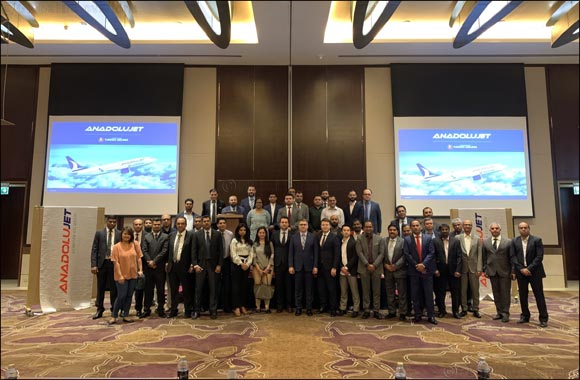 Share Home >> Travel & Tourism
10 weekly flights from Istanbul to Dubai will offer fliers affordability and ideal connectivity to the world.
Dubai, United Arab Emirates, February 20, 2020: Turkish Airlines’ AnadoluJet brand goes global on March 29 with the launch of new international flights from Istanbul Sabiha Gökçen Airport and Ankara Esenboğa Airport. The expansion was announced during the pre-launch event held at Swissotel Al Ghurair, Dubai, with attendance of over 50 representatives from 25 agencies, including Dnata Travel, Kanoo Travel, BCD Travel, and Orient Travel Services.
Set to carry its service quality abroad, the airline’s expanded flight network will include ten weekly flights to Dubai at affordable fares. The service will be available from AED 890 between Istanbul Sabiha Gökçen Airport and Dubai respectively.
Since its inception in 2008, AnadoluJet has provided more than 100 million passengers with affordable, and comfortable flights between Turkey’s domestic airports.  Operating its flights with experienced Turkish Airlines cabin and cockpit crew, AnadoluJet will introduce international routes covering 27 destinations in 17 countries, taking its total 70 destinations in 20 countries.
With its fleet size also set to reach 57 aircraft, the brand will continue to grow abroad while offering affordability alongside the high-quality standards, which Turkish Airlines is globally renowned for. This includes complimentary onboard catering by Turkish DO&CO, free baggage allowance (20 kg checked plus 8kg cabin), as well as other advantageous additional services to make passengers’ travel experiences convenient, and comfortable. Additionally, AnadoluJet’s entire operational processes, from ground services to technical maintenance, will be covered by Turkish Airlines’ stamp of approval.
Speaking at the pre-launch event, Senior Vice President of Regional Flights at Turkish Airlines and Head of AnadoluJet, Mr. Said Samil Karakas, stated; “To this day, Turkish Airlines has carried millions of passengers to four corners of the world. From March 29 onwards, AnadoluJet will continue to share the quality of its parent brand and open its doors to the UAE alongside many international destinations. This expansion will allow us to offer our warm and welcoming Turkish hospitality to many more passengers while providing them with comfortable travel options at affordable prices.”
“As the sub brand of Turkish Airlines, the 87 years-old national flag carrier of Turkey that became the potent symbol of the world-renowned Turkish hospitality in years, we aim to strengthen this position with AnadoluJets' new international flights. Operating at the Anatolian side of Istanbul, and offering an alternative to Turkish Airlines' flights operated at its hub at Istanbul Airport which is located at the European side of the city, AnadoluJet is set to become a meeting point of worldwide passengers with its new international expansion, just like its namesake Anatolia, the land that has long been the connecting point of numerous civilizations throughout history. I believe that after connecting Anatolia from one corner to another, AnadoluJet will successfully link cities of the world with its advantageous flight options.” he added.
With its aircraft consisting solely of the economy class configuration, AnadoluJet will increase its passenger capacity by 22 per cent, offering an additional 1.2 million seats to more travelers at affordable fares. Moreover, new flight planning will offer 30 per cent better connectivity to domestic and international routes.
Tickets for the new flights which will begin as of 29 March are available via AnadoluJet’s and Turkish Airlines’ sales channels.
AnadoluJet’s new international flights operated to/from Istanbul Sabiha Gökçen International Airport and Ankara Esenboğa Airport, and their frequencies from March 29, 2020 are as follows.