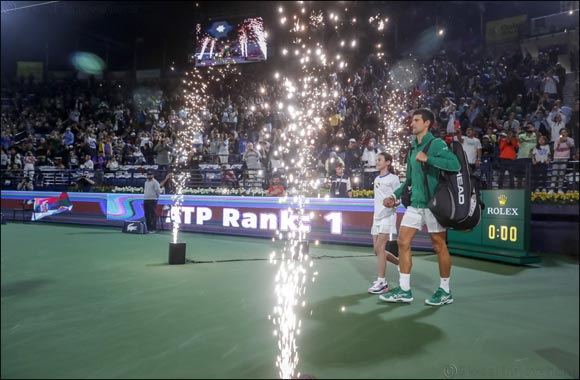 Four-time champion Djokovic is now on a 20-match winning streak dating back to last year at the Davis Cup Finals, and he has now beaten Monfils 17 straight times. But his survival hung in the balance as after losing the opening set he failed to convert two set points at 5-4 and another three at 6-5 in the second set and then found himself 6-3 down in the tiebreak.

But after fighting his way out of that crisis and levelling the match on his eighth set point, Djokovic dominated the third as Monfils salvaged just seven points in the set. Monfils, who narrowly failed to make the 2019 final after losing to Tsitsipas in a final set tiebreak, took two tumbles late in the match and was unable to maintain his challenge, and Djokovic claimed victory after an absorbing two hours 35-minutes.

“He was getting everything back in the court.,” said Djokovic in explaining his struggle. “I mean, I made a lot of unforced errors, especially first set, beginning of the second. Just wasted a lot of mid-court short balls. Just wasn't working. I was kind of flat with my feet. Or when I was coming in, he was easily finding a way to make a passing shot.

“It was tough. It was just one of those matches where you have to hang in. I knew if I managed somehow to get back in the second set, hold my serve, I'll get chances. That's what happened. From this perspective it was better for me to actually win in tiebreak because it got him obviously more tired. I should have I guess won the set 5-4, 6-5. Many missed opportunities.

“I just wasn't taking my chances when I was having rally on those set points. But that kind of turned around from 3-6 in the tiebreak. From that moment onwards I felt I was going through the ball better. Obviously third set it's hard to measure it because obviously he was injured from third game of the third set and it wasn't even close to what he played in the first two hours.“

Tsitsipas, who last week successfully defended a title for the first time in his career in Marseille and is into his second consecutive final in Dubai, has surrendered just one set on his way to the final. He was rarely placed under pressure by Evans and was very satisfied with the way he had played.

“I played really well, both my forehand and backhand side,” said Tsitsipas. “Obviously I was dominating a lot from my forehand side. I was constructing and building the point from the forehand side. It helped tremendously get, like, the lead and the upper hand, kind of being more in charge. I think that was something that helped me get those breakpoints when I had to.

“My service games were close to excellent. I was just playing with a clear head and not thinking of too much, staying in the moment, trying to process of what potentially he's going to use on the court. Yeah, I didn't feel it was a threat. I had time, I had space. It was just a matter of time for me to take the lead and get up in the score.”

Despite his defeat, Evans will be encouraged by his continuing progress. He was competing in his first semi-final since one year ago, and having taken between 2009 and 2019 to earn five wins over top-20 opponents, he has repeated the same feat already in just two months of the 2020 season. His reward is that next week he will be ranked in the top 30 for the first time.

“We could not have asked for a more exciting semi-final as the one we saw between Novak Djokovic and Gael Monfils,” said Colm McLoughlin, Executive Vice Chairman and CEO of Dubai Duty Free. “Monfils came tantalisingly close to one of the most outstanding wins of his long and successful career, and we wish him well during the rest of the season.”

Tournament Director Salah Tahlak added, “So many matches this week have been of the highest quality, and Gael Monfils can be proud of how well he challenged the world number one. The other semi-final also provided great entertainment as Stefanos Tsitsipas had to fight hard to overcome a determined Daniel Evans.”

The Dubai Duty Free Tennis Championships, which is owned and organised by Dubai Duty Free and held under the patronage of H. H. Sheikh Mohammed bin Rashid Al Maktoum, Vice-President and Prime Minister of the UAE and Ruler of Dubai, concludes on 29th February.