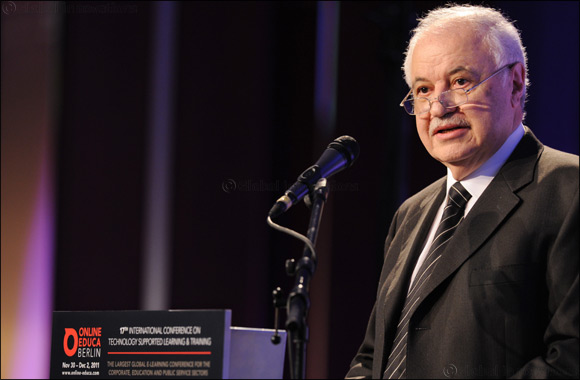 SHARJAH, 20 May, 2020 - The Sharjah Open Innovation Council organised by the Sharjah Research, Technology and Innovation Park, SRTI Park, has launched the first series of remote sessions titled 'Horizons of Scientific Research and Knowledge – based Economy in the Arab World'.

During the session, which was inaugurated by Al Mahmoudi, the reality and future of research and development in the Arab region were discussed.
Al Mahmoudi underlined the pioneering role that Sharjah plays in supporting education, culture and scientific research in the Arab world through the unlimited initiatives of H.H. Dr. Sheikh Sultan bin Muhammad Al Qasimi, Supreme Council Member and Ruler of Sharjah, in this regard.

On the future of the knowledge-based economy in the Arab world compared to the developed world, Rania Al Mashat emphasised that the knowledge-based economy is an indispensable fact that we cannot avoid especially in light of the state of closure in most countries of the world, saying that productivity in countries is based on each citizens’ ability to adapt and prove themselves in modern technologies.

In her talk about the knowledge transformation in the Egyptian economy, the steps taken in this regard, and the challenges faced by this transformation, she touched upon the industrial and research complexes that are available in all Egyptian governorates, infrastructure Informatics and big investments in this field in Egypt.

For his part, Abu-Ghazaleh spoke about the Global Coalition on Information and Communication Technology of the United Nations, and the Arab States Research and Education Network, ASREN, that launched a network for scientific research so that researchers, academics and students can access various scientific research networks and their archives in various countries of the world.

Al Mahmoudi has reviewed the goals and activities of the SRTIP, saying that it was established in the Emirate of Sharjah, with the aim of providing an ideal environment for innovation, and enhancing the areas of research and technology in the region.