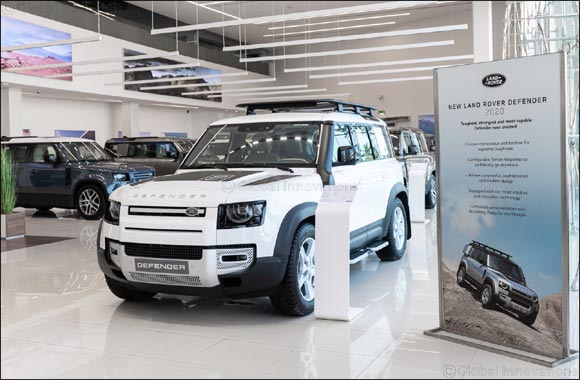 Share Home >> Automobile
• New Land Rover Defender reimagines the iconic 4x4 for the 21st century
• Legendary off-road SUV draws from more than 70 years of innovation to blend unparalleled all-terrain ability with supreme on-road comfort
Dubai, UAE, 28 June, 2020:  Al Tayer Motors, the exclusive retailer for Jaguar Land Rover vehicles in the UAE has announced the arrival of the new Land Rover Defender at its showrooms
Combining over seven decades of innovation, Land Rover’s iconic 4x4 made its debut with a special Defender-only display at Al Tayer Motors flagship showrooms on Sheikh Zayed Road in Dubai and Premier Motors in Khalidiya, Abu Dhabi. Previous generation Defender models, including a classic Series I, II and III were also exhibited at the showroom making it a truly attractive occasion for fans of the iconic 4X4.
On July 4 and 5, the display will be staged at the Al Tayer Motors showrooms in Garhoud, Dubai and Sheikh Mohammed Bin Zayed Road in Sharjah.
“The New Land Rover Defender has arrived to bring a true legend of the off-road world back to showrooms. The new iteration merges legendary Land Rover 4x4 capabilities with superior ride and handling, revolutionary design, innovative technology, and five-star safety features to present a vehicle that is perfectly equipped for any expedition,” commented Talal Merheb, Senior Vice President, Jaguar Land Rover, Al Tayer Motors.
“Importantly, none of the characteristics that draw such strong loyalty to previous Defender editions have been lost as the manufacturer has succeeded in linking the past and the present. The model created quite a buzz when it was first seen at the Frankfurt Motor Show, and it’s no surprise that we’ve already received many inquiries in the lead up to today’s event.”
The most capable Defender yet
Powerful yet efficient engines and an array of intelligent off-road technologies place the New Defender among the most capable 4x4s in the world.
A choice of advanced petrol engines ensure the vehicle has the power and control to navigate any environment.
At launch, the petrol line-up comprises a four-cylinder P300 and a powerful six-cylinder P400, featuring efficient Mild Hybrid Electric Vehicle technology, with both engines paired to a smooth-shifting ZF eight-speed automatic gearbox.
Configurable Terrain Response debuts on the New Defender, allowing experienced off-roaders to fine-tune individual vehicle settings to perfectly suit the conditions, while inexperienced drivers can let the system detect the most appropriate vehicle settings for the terrain, using the intelligent ‘Auto’ function.
Meanwhile, Land Rover’s advanced ClearSight Ground View technology helps drivers take full advantage of the Defender’s all-conquering capability by showing the area usually hidden by the bonnet, directly ahead of the front wheels, on the central touchscreen.
Emotionally charged design
A distinctive silhouette makes the New Defender instantly recognisable, with minimal front and rear overhangs providing excellent approach, departure, and breakover angles. Land Rover’s designers have re-envisioned familiar Defender trademarks for the 21st century, giving the new 4x4 a purposeful upright stance and Alpine light windows in the roof, while retaining the side-hinged rear tailgate and externally mounted spare wheel that make the original so identifiable.
The stripped-back personality of the original Defender has been embraced inside, where structural elements usually hidden from view have been exposed, with the emphasis on simplicity and practicality. Innovative features include a dash-mounted gear shifter to accommodate an optional central front ‘jump’ seat, which provides three-abreast seating across the front like early Land Rovers.
With its new Pivi Pro Infotainment system featuring a dynamic touchscreen, the New Defender is as technologically advanced as it is durable and tough. In addition, the model takes Software-Over-The-Air (SOTA) technology to a new level, with 14 individual modules capable of receiving remote updates, therefore minimising time spent and eliminating the need to visit a Land Rover retailer.
Personalised for your world
The New Defender is available in 90 and 110 body designs, with up to six seats in the 90 and the option of five, six or 5+2 seating in the 110. The model range comprises Defender S, SE, and HSE specification packs. Four Accessory Packs are also offered – Explorer, Adventure, Country and Urban – each giving the New Defender a distinct character with a specially selected range of enhancements.
Now available for sale in the UAE, the New Defender builds on its long and rich heritage in the region. A familiar sight since the 1950s in the Trucial States, which later formed the UAE, the hardy Defenders were among the only trusted modes of transport across the tough desert landscape with their legendary all-terrain capability.
The original Series and Defender models have long been relied upon by a diverse group of motorists to stand up to the region’s testing terrain. New chapters in the vehicle’s long story have already been written, as the  New Defender was pushed to its limits during more than 62,000 gruelling development tests. The model covered more than 1.2 million kilometres across some of the harshest environments on earth, including the Middle East’s unforgiving desert landscape.
The #NewDefenderUAE is now available for viewing, test drives, and to order at Al Tayer Motors showrooms in Dubai and the Northern Emirates and Premier Motors in the Emirate of Abu Dhabi. Starting price, inclusive of VAT, of the Defender 90 is AED 232,470 & Defender 110 is AED 247,905.