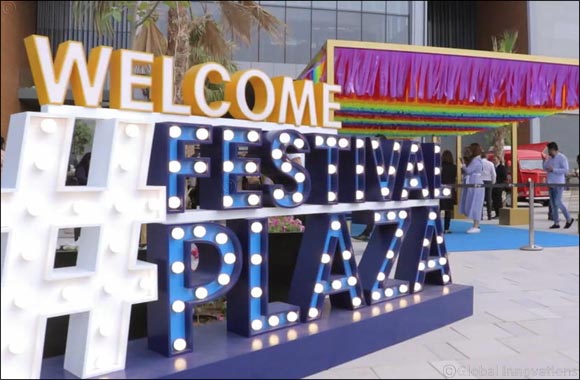 More Than 4,500 Incredible Prizes to Be Won in the 23rd Edition of Dubai Summer Surprises

Dubai, United Arab Emirates, 20 July 2020:   Dubai Summer Surprises (DSS), the summer celebration of shopping and family fun, is once again offering residents and visitors the chance to win a selection of over 4,500 prizes including luxury cars, mall vouchers and cash giveaways.

In keeping with its proud 23-year tradition, this year’s DSS features seven weeks of mega raffles and promotions, and is bringing together families from across the UAE and around the world to experience unmissable deals and exciting opportunities to take home life-changing prizes.

Ahmed Al Khaja, CEO of Dubai Festivals and Retail Establishment (DFRE) said: “With every edition of DSS, we have strived to exceed the expectations of all our visitors with amazing promotions and chances to win an unbelievable selection of prizes and shopping experiences. This year is no different, as our retail partners have made big efforts to offer a superb range of luxury vehicles, shopping vouchers and more to be enjoyed by the whole family. The prizes on offer, and the huge interest shown by shoppers, reflects the reputation of DSS as one of the region’s most anticipated and appreciated shopping celebrations.”

Abdalla H. Al Ameeri, Director of Raffles and Retail Promotions (DFRE) said: “This edition of DSS is the ideal opportunity for Dubai to showcase its famously multifaceted retail sector to residents and visitors, and to reinforce its positioning as the premier global shopping destination where great deals, fun experiences and prizes can all be enjoyed. This year, there truly is something for the whole family to enjoy and remember forever.”

DSS Cadillac Promotion Draw
The DSS Cadillac Promotion Draw, in association with Al Ghandi Auto, invites shoppers to win a brand new 2020 model Cadillac CT5 when they spend AED100 at any store in Souk Madinat Jumeirah or JBR – The Walk. Residents and visitors can take a closer look at the AED175,000 luxury sedan car by visiting Souk Madinat Jumeirah or JBR – The Walk with the cars on display until 26 August. The draw for this super DSS raffle will take place on 26 August.

GAC GS8 SUV Grand Raffle
Shoppers who enter this thrilling Spend and Win promotion can win a chance of driving off in a brand new GAC sports utility vehicle this DSS, in association with Gargash Motors & General Trading. Until 29 August, visitors to Ibn Battuta mall who spend AED200 at any outlet or store will enter a raffle to win the grand prize of a GAC GS8 SUV worth AED96,000, as well as a selection of great prizes such as shopping, entertainment and F&B vouchers. The draw for the GAC GS8 SUV, the perfect family car, will be on 29 August.

Festival Souk Daily Prizes
Dubai Festival City Mall and Festival Plaza Mall are hosting daily DSS Shop & Win promotions with prizes totaling AED100,000 in vouchers. Residents and visitors who spend AED200 at the Festival Souk sale, which is taking place at both Dubai Festival City Mall and Festival Plaza Mall throughout DSS, will have a chance of winning AED1,000 in mall shopping vouchers each day. The Festival Souk promotion also offers deals of up to 50 per cent off current and past season items from a huge range of stores.

Shop, Win and Save Lives with Mercato Mall
Residents and visitors on the lookout for DSS deals can shop the sales, support a good cause and enter a draw to win prizes totaling AED52,000 at Mercato Mall. During DSS, shoppers who spend AED100 in the Jumeirah mall can take part in a daily prize draw for AED1,000. For every AED100 spent in the mall, AED1 will be used to help the UAE in its fight against Covid-19 through a nationwide fund supported by the Department of Islamic Affairs and Charitable Activities.

Dubai Shopping Malls Group (DSMG): AED1 million in Cash and Cars, Eid Al Adha and Back to School Prize Draws
Until 29 August, shoppers can win prizes totaling AED1 million, including cash and luxury cars, when they enter the Dubai Shopping Malls Group’s DSS digital raffle draw. Seventy people will win cash giveaways totaling AED300,000 or six INFINITI Q50 cars when they spend AED200 at participating malls. The draws for six INFINITI Q50 cars will take place on 25 July and 8, 15, 22 and 29 August.
This year, Dubai Shopping Malls Group’s DSS promotion also includes the great Eid Al Adha giveaway and Back to School draw. The Eid Al Adha promotion will take place from 19 July until the three days of Eid, with 50 winners landing cash prizes worth AED200,000. The Back to School promotion will run from 9 August to 29 August and see 20 lucky winners winning a total of AED100,000.
Spend and Win with Meraas This DSS
Visitors who spend over AED5,000 at Meraas destinations will automatically get upgraded to the Meraas App’s platinum subscription. This entitles members to enjoy exclusive discounts and prizes until the end of 2020. In addition to this, with every spend of AED500, shoppers will enter a grand prize draw to win a Meraas Gift Card worth AED50,000 that can be redeemed across all Meraas’ destinations.
DSS Share Millionaire
Shopping dreams can come true at this year’s DSS with the incredible DSS Share Millionaire promotion. Until 22 August, visitors to Mall of the Emirates, City Centre Mirdif and City Centre Deira who spend AED300 at any outlet and scan their receipts using the SHARE smartphone app can be in a chance to win an amazing One Million Share Points that can be redeemed across all three malls. Worth a total of AED600,000, six DSS Share Millionaires will be announced, with draws taking place on 25 July and on 1, 8, 15 and 24 August. The last day shoppers can enter this promotion is 22 August.
Beat My Summer Style - Influencer Shopping Challenge
Dedicated followers of fashion can win big by following their favourite influencers this DSS. Some of the UAE’s most popular online influencers will engage with their social media fans in exciting weekly challenges taking place throughout DSS. As part of the fun and fashionable events, the in-the-know influencers will give away shopping vouchers worth a total of AED100,000. One lucky influencer fan will also win a grand prize of AED10,000.
The 23rd edition of Dubai Summer Surprises (9 July until 29 August 2020) is part of Dubai’s annual Retail Calendar that features major retail-based festivals, mega sales and exclusive retail experiences and attractions.