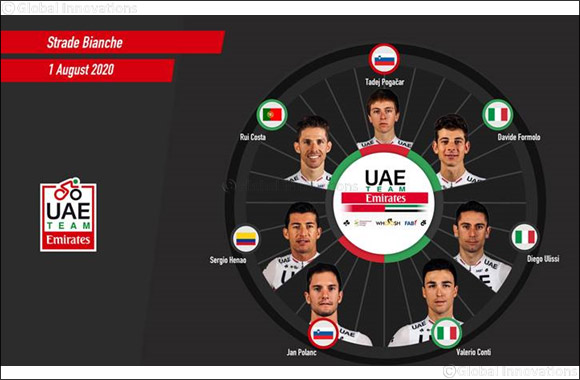 Share Home >> Entertainment
Dubai, United Arab Emirates, July 28, 2020: Few races on the cycling calendar are as iconic as Strade Bianche, a one day event which takes place on the white gravel roads of the stunning Tuscan landscape. Despite this only being its 14th edition, the Italian ‘Spring Classic’ has quickly captured the imagination of cycling fans from around the world and this year its significance is greater than ever as it signals the restart of the WorldTour season.
The 2020 edition, which was postponed in March due to the global pandemic, returns on Saturday 1st August and UAE Team Emirates has assembled an all star cast to take on the 184km route, which starts and finishes in Sienna.
Tadej Pogacar, whose last WorldTour race saw him win on top of Jebel Hafeet at the UAE Tour in February, joins a team of seven that includes his fellow countryman Jan Polanc, the Italian trio of Diego Ulissi, Valerio Conti and Davide Formolo as well as Sergio Henao and the 2013 World Road Race Champion, Rui Costa.
Diego Ulissi said: 'It will be unusual racing on the white roads in August rather than March but regardless of that I'm sure it will be a beautiful race. It will be a little unpredictable for sure, because it is several months since we last raced, but I know me and my teammates have been preparing well. We are all just really happy and motivated to be pinning on a race number again”.
The team will be guided by Sports Director Marco Marzano, who added: “It will be a big moment to finally return to competition after the long period away. It has been a challenging time but the riders have stayed positive throughout the break and managed to prepare very well for these first races. It could be an unpredictable race, but we have a number of cards to play”.
The races come in quick succession for UAE Team Emirates following Strade Bianche with two different squads heading to back to back one day events in Italy with the Gran Trittico Lombardo (199.7km, Legnano – Varese) and Milano Torino (198km, Mesero – Stupinigi) taking place on August 3rd and August 5th respectively.
Gran Trittico Lombardo
• Tom BOHLI (Switzerland)
• Valerio CONTI (Italy)
• Marco MARCATO (Italy)
• Edward RAVASI (Italy)
• Alexandr RIABUSHENKO (Belarus)
• Alessandro COVI (Italy)
• Jan POLANC (Slovenia)
Milano Torino
• Tom BOHLI (Switzerland)
• Sven Erik BYSTROM (Norway)
• Fernando GAVIRIA (Italy)
• Alexander KRISTOFF (Norway)
• Marco MARCATO (Italy)
• Maximilano RICHEZE (Argentina)
• Oliviero TROIA (Italy)