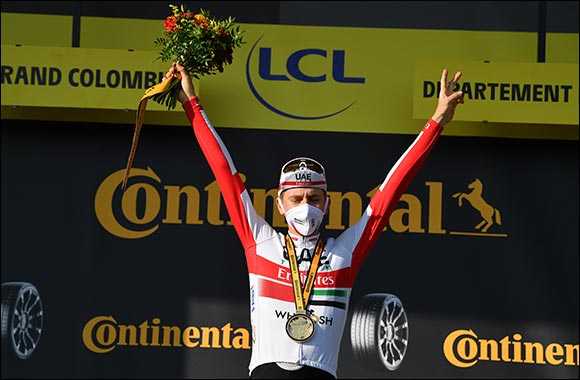 Share Home >> Entertainment
United Arab Emirates,  September 14, 2020:  UAE Team Emirates’ Tadej Pogacar claimed his second stage victory of the Tour de France and the third for the Emirati squad, beating GC leader, Primoz Roglic (Jumbo-Visma) atop Grand Colombier.
Pogacar took the victory and valuable bonus seconds on the line just ahead of fellow Slovenian, Roglic cutting the deficit to 40 seconds in the General Classification.
Pogacar once again showed his class by timing his sprint to perfection with a dash for the line inside the final 100m but wasn’t able to shake Roglic who stayed on his wheel until the end.
Tomorrow sees Pogacar remain in the White Jersey as the UAE Team Emirates team leader now boasts a 2’35” lead over Enric Mas (Movistar).
Monday also gifts the team with a well-earned rest day before the final battle for the yellow jersey recommences on Tuesday with the 16th stage - the La Tour du Pin-Villard de Lans, 164 km with the ascents of the Cote de Virieu (4th category), of the Col de Gates (2nd category), the Cote de Revel (2nd category), the Montée de Saint Nizier du Moucherotte (1st category) and the final climb of the Cote 2000 (3rd category).
Pogačar: “The race started at great speed until the breakaway went, and we had Marco Marcato there to cover it.
“Jumbo-Visma set a very high pace and maintained it throughout the stage, which along with the heat meant it was better not to attack. In the final, I waited for the sprint and took another beautiful victory. Some of the GC guys were dropped and this was due the effect of the pace set by Jumbo-Visma.
“Tomorrow we’ll have the rest day, then I’ll try to give my best again: at the moment, Roglic seems unbeatable, but anything can happen, anyone can have a bad day, as happened today to Bernal or as can happen to me or to PrimoZ.”
Stage 15 results:
1. Tadej Pogačar (UAE Team Emirates) 4:34:13
2. Primoz Roglic (Jumbo-Visma) s.t.
3. Richie Porte (trek-Segafredo) @ 5 ”
General classification after the 15th stage:
1. Primoz Roglic (Jumbo-Visma) 65:37:07
2. Tadej Pogačar (UAE Team Emirates) @ 40″
3. Rigoberto Uran (Ef) @ 1’34 “