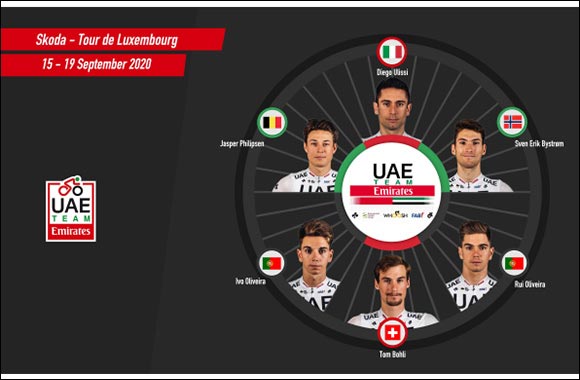 Ulissi to Lead UAE Team Emirates at the Tour of Luxembourg

Share Home >> Entertainment
United Arab Emirates,  September 16, 2020: UAE Team Emirates has confirmed a strong and versatile squad for the Tour of Luxembourg (September 15-19), which will be headed up by the experienced puncheur Diego Ulissi.
The riders will tackle 835km of tarmac, packed full of steep climbs and sprint finishes during the five-day tour. The mix of terrain will offer some great opportunities for Ulissi and the team’s fast man Jasper Philipsen who both head to the race with an eye on stage wins.
Sports Directors Aurelio Corral (Spa) and Neil Stephens (Aus) will lead the six-man squad.
-Diego Ulissi (Ita)
-Sven Erik Bystrøm (Nor)
-Tom Bohli (Swi)
-Ivo Oliveira (Por)
-Rui Oliveira (Por)
-Jasper Philipsen (Bel)
Ulissi said: 'It's a race with lots of short but steep climbs which should suit me. I've been consistent and I'm hoping to convert that consistency into a win very soon. This will be an important part of the build-up for the Giro d'Italia. We will have Jasper for the sprint finishes and I think between us we can work off each other well”.