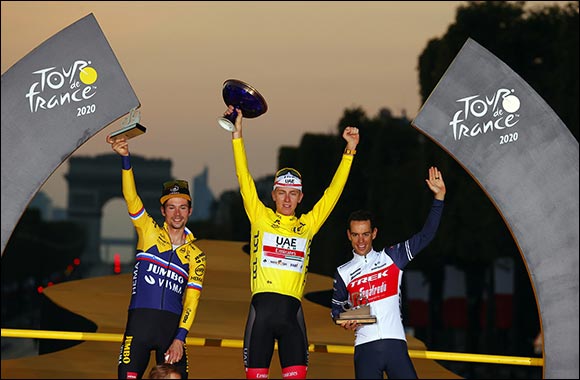 Share Home >> Entertainment
• Four stage wins for the Emirati squad
• Tadej Pogacar, the youngest Tour de France champion of the 21st century
United Arab Emirates,  September 21, 2020:  In just four years UAE Team Emirates has moved from being a start-up cycling team to a world class organisation that has now won the biggest bike race in the world with its star rider, Tadej Pogacar.
Pogacar, who has just turned 22, officially became the youngest ever post-war Tour winner in what was his first ever Tour de France.
His historical win came after three gruelling weeks and 3,385km of racing across France with a committed team behind him. Seven other riders took to the start line on August the 29th in Nice with one primary goal - and that was to win the overall classification with their leader, Tadej Pogacar.
Not only has this goal been achieved, but the team has also managed to win four of the 21 individual stages (Alexander Kristoff - stage 1, Tadej Pogacar stages 9, 15 and 20) and take hold of the Young Rider’s white jersey and the King of the Mountains polka dot jersey.
It is an unforgettable moment in cycling which has written both Pogacar and UAE Team Emirates into the history books.
“It’s unbelievable - really crazy,” Pogačar said. “Even if I didn’t win – if I was second or even last – it wouldn’t matter, it would be still nice to be here. But this is just the top of the top. I cannot describe this feeling with words.
“Today was really special moment with my teammates. There was finally time to talk with them on the bike, and not just going full gas all day. A lot of respect for all the riders. Every single one of them congratulated me today, and I’m really thankful. This sport is really amazing.”
Whilst Pogacar will be heralded as the man of the moment, the effort of the team cannot be underestimated. Throughout the race he was able to rely on the formidable squad around him in the form of David De La Cruz, Davide Formolo, Fabio Aru, Alexander Kristoff, Vegard Stake Laengen, Marco Marcato and his oldest friend Jan Polanc.
Their continued efforts kept Pogacar safe and enabled him to perform to the best of his abilities. It was their selfless drive as teammates, along with Pogacar’s innate talent, which brought the beautiful victory home for UAE Team Emirates.
Whilst this is undoubtably the biggest victory the team has achieved in its four years of racing, it is certainly not the first.
In 2019, 31 wins were recorded including Pogacar’s three stage victories at the Vuelta a Espana. In 2018 and 2017 the team achieved 14 and 19 victories respectively.
This year alone its riders have already stood on the podium’s top spot no less than 28 times, four of which have been National Championships, and the season is only halfway through.
There is a clear upward trajectory for UAE Team Emirates, who have improved their squad and their performances year on year – and with Pogacar signed up on a long-term contract, things can only get better.
Pogacar said, “Since I arrived at UAE Team Emirates, I felt part of the family. I have many friends in the team and there has always been a good atmosphere with the riders and the staff. That’s also one of the main reasons why I recently renewed my contract with the team until 2024. UAE Team Emirates is a long-term project with some strong sponsors, and I am proud to be part of it.”