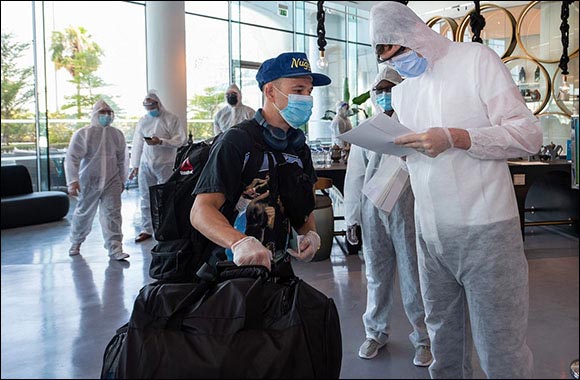 Abu Dhabi, UAE - September 23, 2020: Abu Dhabi has demonstrated its commitment to safely organising large, high-profile events through successful management of health and safety protocols, as some of the biggest names in UFC®, the world’s premier mixed martial arts organisation, touched down in the UAE capital for the much-anticipated Return to UFC Fight Island. The mega five-event series is set to take place on Yas Island from September 27 to October 25.

Brazilian fighter Paulo Costa and opponent Israel Adesanya arrived at the W Hotel, inside the UFC Fight Island safe zone on Yas Island, ahead of their UFC® 253: ADESANYA vs COSTA clash on September 27. Both sporting black face masks on arrival, the pair were joined by Jan Blachowicz and Dominick Reyes, who go head-to-head in the co-main event light heavyweight bout on the same event card.

Other athletes touching down on Yas Island include Ketlen Vieira, Kai-Kara France, Juan Espino, and Hakeem Dawodu. As part of the strict public health and safety protocols, and in line with Abu Dhabi’s globally recognised response to COVID-19, the athletes were given a safety briefing before undertaking a 48-hour self-quarantine in their hotel rooms.

Following two initial COVID-19 tests prior to their departure and upon arrival in Abu Dhabi, the athletes are required a third negative test before they can leave their hotel rooms and access the state-of-the-art UFC Fight Island™ safe zone, which includes all event facilities on Yas Island.

Having achieved a new benchmark in global sport safety with its pioneering ‘bubble’ concept at the inaugural UFC Fight Island™ in July, the 6 square km safe zone incorporates the arena, hotels, and training facilities, as well as entertainment and dining establishments. The safe zone is only accessible to UFC fighters, coaches, delegates and UAE-based event personnel, as well as employees necessary to ensure operational continuity of Yas Island facilities.

Return to UFC Fight Island events will be broadcasted in the UAE and across the MENA region on UFC Arabia, UFC’s first Arabic-language subscription service in the region, which is available through Apple Store and Google Play, as well as via web browsers and smart TVs.

Insightful and Intuitive: The Next-Generation Features that Seamlessly Integrate ...

MBRU to Connect With Future Healthcare Professionals at Najah Connect 2020

Emirates Post Marks the Start-up of Unit 1 of Barakah Nuclear Energy Plant With ...

Leap Further Ahead with HUAWEI Mate 40 Series: Huawei Unveils the Most Powerful ...