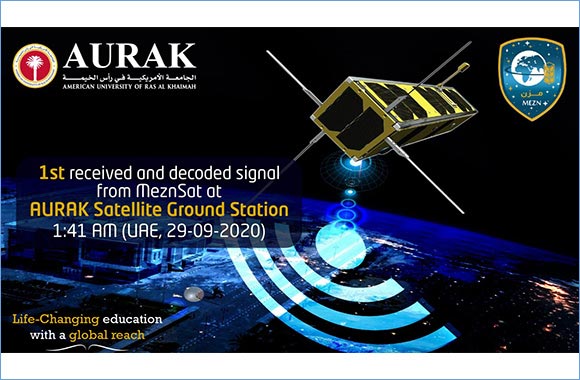 United Arab Emirates,  September 30, 2020:  The satellite ground station of the American University in Ras Al-Khaimah (AURAK) dedicated to track and communicate with the “MeznSat” satellite, has successfully received the first decoded signal from the satellite, which was successfully launched yesterday afternoon from Russia.

The ground station at the university campus was designed by AURAK students to track the satellite, receive data from it and send commands, has received the first signal from “MeznSat” while it was passing in the airspace of United Arab Emirates at exactly 1:41 AM, local time (29th Sept 2020). The AURAK Satellite ground station is also designed to communicate with other satellites in the orbit.

Dr. Abdel Halim Jallad, the supervisor of 'MeznSat' project at AURAK said: 'We are very pleased with our success in receiving the first signal from the satellite during its passage through UAE airspace early this morning. As per the first signs, the satellite is in good conditions, and the batteries are well charged. On the other hand, we succeeded in sending a signal that the satellite successfully received and acknowledged, and this is an encouraging indicator which shows that the satellite is progressing in its mission.” Dr. Jallad added, “The passage of the satellite today in UAE’s airspace was successful. We look forward to its passage tomorrow afternoon in order to get more information and move forward to the next and most important stage, which is commissioning of rotation and stability on the orbit. '

MeznSat was launched in a Soyuz-2 rocket from Russia yesterday. It will orbit the Earth 565km above sea level on a mission expected to last three years. A ground station at AURAK’s space lab will monitor its movements, collect data and analyze them in cooperation with UAE Space Agency and Khalifa University.

Expert Urges Osteoporosis Patients to Get Back on Track With Bone-Health Injecti ...

Enhance your Mood with Rasasi Perfumes

The Eagle has Landed, The Highlight is Shining? Khabib, Gaethje, and UFC 254 Fi ...