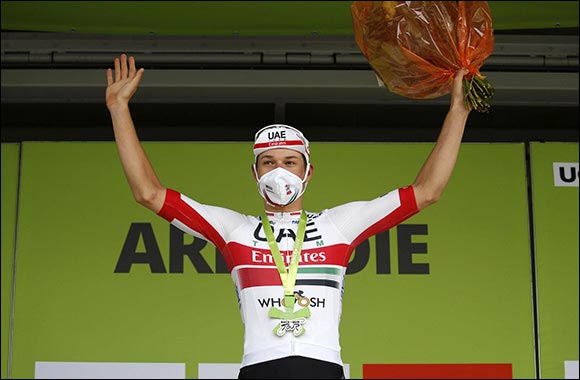 Share Home >> Entertainment
30th win of the season for UAE Team Emirates
United Arab Emirates,  September 30, 2020:  Jasper Philipsen showed a quick turn of speed and great skill to navigate his way to victory on stage 1 of the BinckBank Tour (WT) in Belgium.
The relatively short opener from Blankenberge to Ardooie (132.1k) sprung to life in the closing kilometres as narrow roads and high speeds saw the bunch string out and caused numerous crashes. The most prominent spill came with 3.3km to go and took down over 20 riders including two from UAE Team Emirates, however neither were seriously injured with Alessandro Covi only suffering some minor abrasions.
In the closing metres Philipsen weaved his way to the front in the tight sprint to get his second win of the season and the team’s 30th.
Philipsen said, “It was quite a straightforward day in the beginning. With just 2 riders in the breakaway the peloton was confident that it was going to end in a bunch sprint. It was quite hectic in the end as everybody was still fresh so there were a few crashes on the run-in. I managed to stay out of trouble and had the legs to win. For me it’s the nicest win of my career so far and I’m super happy.”
For his victory Philipsen will also wear the yellow jersey for the stage 2 Individual Time Trial tomorrow which starts and finishes in Vlissingen (10.9k).
Stage 1 Results
Jasper Philipsen (UAE Team Emirates) 2:59:56
Mads Pedersen (Trek-Segafredo) s.t
Pascal Ackermann (Bora- hansgrohe) s.t
General Classification after stage 1
Jasper Philipsen (UAE Team Emirates) 2:59:16
Mads Pedersen (Trek-Segafredo) +4
Pascal Ackermann (Bora- hansgrohe) +5

Expert Urges Osteoporosis Patients to Get Back on Track With Bone-Health Injecti ...

Enhance your Mood with Rasasi Perfumes

The Eagle has Landed, The Highlight is Shining? Khabib, Gaethje, and UFC 254 Fi ...