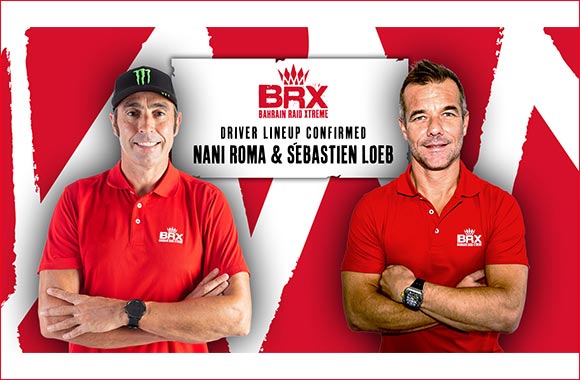 Share Home >> Automobile
United Arab Emirates,  October 05, 2020:   Bahrain Raid Xtreme has confirmed the latest addition to its driver line up for the 2021 Dakar Rally. French rally legend Sebastien Loeb will complete the team’s pair of drivers, following the recent news that Spaniard, Nani Roma would drive for BRX. Loeb joins BRX with more than twenty years of rally experience – having won the World Rally Championship a record nine times in a row.
Forty-six-year-old Loeb is no stranger to the Dakar Rally, having made his maiden appearance in 2016 before featuring for four consecutive years, claiming two podiums in the process. Loeb has also added to his experience in the FIA World Touring Championship, 24 Hours of Le Mans, X Games, Formula 1 tests and the FIA GT Series.
BRX Driver, Sebastien Loeb, commented: “BRX have got big ambitions for the 2021 Dakar Rally and I’m excited to be a part of the journey with the team. There is an immense amount of experience in each area of the team; the best in the field with Prodrive, a track record of success from David Richards, and Bahrain’s rich history in motorsport. This combination is hard to rival, and I’m confident we will take to the dunes as strong contenders in next year’s Dakar.”
The new team – founded by Prodrive International, a joint venture between the Kingdom of Bahrain and world-leading British motorsport business, Prodrive – is being led by David Richards, CBE; founder and chairman of Prodrive. Throughout his tenure, Richards has led Prodrive teams to six World Rally championship titles, six Le Mans wins and experience leading successful F1 teams. However, the Dakar Rally is the challenge he has yet to undertake. For the Kingdom of Bahrain, BRX is the nation's latest foray in motorsport, becoming the exciting next chapter in its rich history in the sport.
BRX Team Director, David Richards commented: “On behalf of BRX, I am thrilled to welcome Sebastien to the team. He brings with him a wealth of Rally experience and is, we believe, one of the strongest drivers in the field. We look forward to working closely together over the next few months of testing, as we build towards next year’s race.”
Loeb will drive BRX’s bespoke Dakar Rally T1 car – a four-wheel drive car, powered by a 3.5 litre turbo-charged petrol V6. The vehicle builds on Prodrive’s experience competing at the highest levels of world motorsport for over three decades and has been styled by Ian Callum, one of the world’s leading motorsport designers. Development of the car and engine has been underway at Prodrive since mid-2019, and the first car is expected to be revealed in the autumn.
CAR SPECIFICATION
ENGINE
• Front-mid
• 3.5 litre V6 twin turbo
• Single plenum/throttle
• Dry sump
• Power 400 bhp
• Torque 700 Nm
TRANSMISSION
• 4 wheel drive
• Six speed sequential shift gearbox
• Front, centre and rear differentials
CHASSIS
• High strength steel tubular structure
• Carbon and natural fibre composite bodywork
• Built-in hydraulic jacks
SUSPENSION
• Double wishbone
• Two fully adjustable dampers per wheel
INTERIOR
• Carbon fibre seats
• Six-point safety harness
• Dual fire extinguisher system
• Lightweight lithium-ion battery
• Navigation system
FUEL SYSTEM
• 500 litre in safety cell to FIA standards
BRAKES
• Six pot front calipers
• Six pot rear calipers
• Vented discs
WHEEL & TYRES
• 16 X 7
WEIGHT & DIMENSIONS
• Length - 4.5m
• Width - 2.0m
• Height - 1.8m
• Wheelbase - 2.9m
• Dry weight - 1850kg

A Biden Win Predicted but a Contested Result in the US Election Will Be the Bigg ...