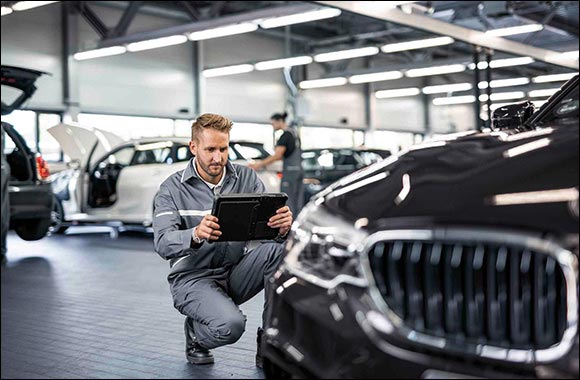 United Arab Emirates,  October 12, 2020:   The BMW Group posted solid year-on-year sales growth of 8.6 percent in the third quarter, with a total of 675,680 vehicles delivered to customers. As expected, the sales performance from January to September meanwhile reflects the global impact of the Corona Pandemic. During this period, the company sold 1,638,316 (-12.5%) premium BMW, MINI and Rolls-Royce vehicles worldwide.

“Thanks to our strong model line-up, we were able to increase our third-quarter sales year-on-year, despite the lasting effects of the coronavirus pandemic,” said Pieter Nota, member of the Board of Management of BMW AG, responsible for Customer, Brands, Sales. “We are especially pleased with the sales growth of almost 50 percent in electrified vehicles. This makes electromobility a substantial growth driver. We have already delivered around 10,000 fully-electric MINIs* since the start of the year. This shows how much our customers appreciate this car,” Nota continued.

Strong product portfolio spurs third-quarter sales growth
In the third quarter, 9.8 percent more BMW vehicles (585,336 units) were sold than in the same period of last year. The company generated important product momentum with new models like the BMW 2 Series Gran Coupé, updated BMW 5 Series models and the BMW X3, which is now available with four different drive train variants. Due to effects from the coronavirus, 11.3 percent fewer BMW vehicles were delivered to customers in the first nine months of the year.

The MINI brand delivered a total of 208,144 (-20.0%) vehicles to customers in the year to the end of September. In the third quarter, MINI posted encouraging sales growth of 1.9 percent.

Rolls-Royce Motor Cars reported sales of 2,651 (-28.5%) motor cars year to date. Global demand remains strong across all models, with third quarter sales up +54% compared to the previous quarter (Q2 2020). Increasing order intake indicates a robust fourth quarter and a strong end to the year. New Ghost was launched in September with first customer deliveries due in late Q4.

Electromobility as a substantial growth driver
The BMW Group delivered a total of 116,381 (+20.0%) BMW and MINI electrified vehicles to customers in the first nine months of the year. With 54,719 units delivered in the third quarter, the company sold 46.6 percent more electrified vehicles than in the same period of the previous year.

The new plug-in hybrid variants of the BMW X2*, BMW 3 Series and BMW 5 Series underscore the BMW Group’s leading role in the premium electrified segment in Europe and worldwide. Deliveries of the fully-electric BMW iX3* will begin before the end of 2020.

Next year, the BMW Group will continue the systematic electrification of its model line-up, with the fully-electric BMW i4 and the BMW iNEXT. The company plans to have more than seven million electrified vehicles on the roads by 2030; two thirds of them fully-electric. By 2023, the BMW Group will offer customers no fewer than 25 electrified models – including a fully-electric variant of the next-generation BMW 7 Series, the BMW X1 and the BMW 5 Series. Customers will be able to choose between the pure electric vehicle, a plug-in hybrid, an efficient diesel and a petrol version with 48-volt technology.

MINI models are also contributing to sales success in the field of electromobility. The fully-electric MINI Cooper SE* has proved particularly popular with customers, with around 10,000 units sold in the year to date.

Germany
The BMW Group increased sales by 12.1% (85,579 units) in its domestic market in the third quarter. Due to the coronavirus, the number of cars sold since the start of the year was down 16 percent overall to 201,865 units. With an increase of around 44%, sales of electrified vehicles have been very positive since the beginning of the year reaching a share of around twelve percent of total sales.

Europe
In the Europe region, a total of 648,107 (-19.7%) BMW and MINI vehicles have been delivered to customers since the start of the year. Third-quarter sales were 7.1 percent higher than in the same period of last year (275,618 units). Sales of electrified vehicles (+85.1%) were particularly encouraging during this period. Overall, the situation in Europe continues to vary from region to region due to the coronavirus pandemic.

Americas
With 99,052 vehicles sold in the third quarter (-17.0%) and 251,154 in the year to September (-25.7%), the sales situation in the Americas currently seems to be the hardest hit by the pandemic. However, last quarter customer demand for BMW vehicles in the US recovered faster than expected. In the last quarter, sales of electrified vehicles in the Americas region increased by more than a quarter (+28.2%).

China
In China, sales of BMW and MINI vehicles totalled 559,681 units for the first nine months of the year; 6.4 percent higher than in the same period of last year. After an encouraging second quarter, recovery continued in China in the third quarter with a significant sales increase of 31.1% to 230,612 units. Per September the sale of electrified vehicles in China increased by 7.4 percent (20.713 units).