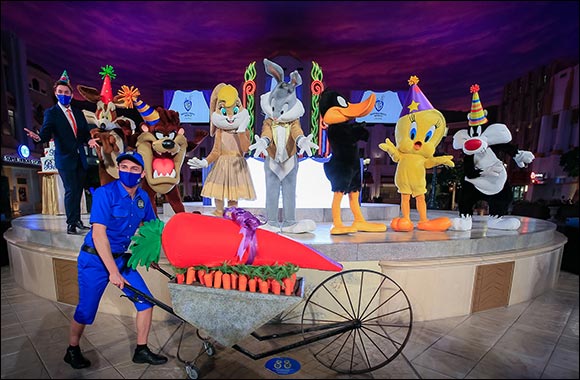 Abu Dhabi, United Arab Emirates, October 17 2020:  Warner Bros. World™ Abu Dhabi pulled back the curtain today to reveal its reimagined logo. The new brand identity, which features a mischievous Bugs Bunny atop the iconic Warner Bros. shield, was revealed to guests at the park just seconds after Bugs Bunny’s surprise 80th anniversary celebrations wrapped up at the Warner Bros. Plaza. The Park’s new logo embodies the exciting experiences guests can expect at the World’s Largest Indoor Theme Park and comes on the heels of the Studio’s brand refresh that included the introduction of a refined and modernized version of the iconic shield, which is reflected in the Park’s new adaptation.

Commenting on the logo reveal, Don Strickler, General Manager at Warner Bros. World Abu Dhabi, said: “We are delighted to introduce the theme park’s new logo to fans after months of development and excitement featuring everyone's favorite rabbit, Bugs Bunny. We recently commemorated 80 years of Bugs Bunny during a fantastic birthday bash held at the park. Shining the spotlight on our new identity on the heels of that was truly the icing on top of the cake!”
“Alongside the team at Warner Bros. Consumer Products, we were excited to communicate the Park's refreshed brand in a more dynamic and playful manner, to give guests a taste for what they can expect when they walk through our Park doors.”

“When visiting the park, guests enter a world of unlimited entertainment, and introducing our new logo is yet another step in the journey towards truly showcasing this world-class experience. Armed with our new look, we’re dedicated to delivering the same unparalleled entertainment experience that our fans from across the globe have come to know and love,” added Strickler.

Featuring the rascally rebel Bugs Bunny, the new logo evokes the spirit of family fun and adventure that has become hallmarks of the Warner Bros. World experience. Celebrating his 80th anniversary, Bugs Bunny becomes an unofficial mascot for the park, delivering fun and frenetic moments. Whether it's admiring his golden statue at the Park's entrance, dining at The Starlight restaurant, or meandering the streets of Cartoon Junction – Bugs Bunny is ever-present throughout the Park.

Guests are also in for a treat with an all special 15 minutes live show running till November 7 at the Warner Bros. Plaza in celebration of 80 years of the looniest legend.

The award-winning theme park is set to gradually roll out the refreshed brand across main landmarks at the Park.


A Biden Win Predicted but a Contested Result in the US Election Will Be the Bigg ...

Surge in Savings This Diwali With City of Gold Diwali Fortune