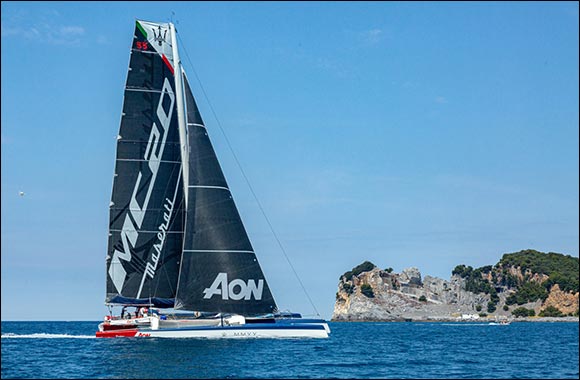 United Arab Emirates,  October 18, 2020:  Giovanni Soldini and Maserati Multi 70’s Team are ready for the Rolex Middle Sea Race, organized by the Royal Malta Yacht Club, that started on Saturday October 17th from Valletta, Malta. The 41st edition of the historical regatta officially marks the resumption of Maserati Multi 70’s racing season, which was put on hold since February because of the medical emergency.

Because of the on-going pandemic, Soldini and his crew stopped in Marina di Ragusa, Sicily, from where they will set sail to arrive in Valletta just a few hours before the start of the race. Soldini explains: «Unfortunately the virus is still a problem and we want to make sure that everybody – both us and everyone else – is as safe as possible. We agreed with the race organization that we will arrive in Malta on the same day as the race starts and that we will not land, in order to decrease the risk of contagion».

The first group of the 57 boats entering the race, 11 of which are Italian, set sail on October 17th at 11.00 local time (9.00 UTC), the last group to start will be the multihulls, among which is Maserati Multi 70.

In the multihulls category, Maserati Multi 70’s Team will challenge five competitors. Their direct rival is MOD 70 Mana (former Spindrift), skippered by Brian Thompson. Soldini comments: «Thompson is an excellent skipper. We already raced against him many times, both aboard Phaedo3 and, more recently, aboard Argo: it’s going to be a great race».

Alongside the two MOD70s, there will be three more trimarans: Antoine Rabaste’s 80’ Ultim’Edition 2, already challenged by the Italian Team during the Cape2Rio 2020 under the name LoveWater; the 63’ Shockwave, skippered by Jeff Mearing and Scott Klodowski; the Multi 50 Primonial, skippered by Sébastien Rogues, winner of the third place at the 2019 Transat Jacques Vabre.

Finally, there will also be a catamaran in the multihulls category, the Italian Outremer 55 Light Asia’, skippered by Marcello Patrizi.
Soldini explains: «For this edition of the regatta we will race in classic MOD mode. We are currently working on the flying appendixes: we are developing a completely new asset, with cutting-edge central rudder, dagger-board and foils that will radically change the world of ocean flying. We are going to work on those for a few more months, so for now we will have to sail with the MOD appendixes».

Aboard the Italian trimaran, alongside skipper Giovanni Soldini, there will be a 7-man crew: Matteo Soldini and Oliver Herrera Perez, part of Maserati Multi 70’s Team; back on board Vittorio Bissaro, who already participated in many races with the Team, including the 2018 Rolex Middle Sea Race; also coming back, after the Cape2Rio 2020, John Elkann and Pierre Laurent Boullais; finally two more sailors, on board for the first time, Lorenzo Bressani, with 11 World titles, 8 European titles and 16 Italian titles to his name, and Cédric Bader, a young sailor who races in many classes, including Formula 18 and Nacra 17.
Giovanni Soldini and his crew already participated in two editions of the Rolex Middle Sea Race (in 2016 and 2018) aboard Maserati Multi 70, winning Line Honours both times and, in 2016, setting the new multihull record (2 days, 1 hour, 25 minutes and 1 second). The overall record belongs to George David who, in 2007, finished the race in 1 day, 23 hours, 55 minutes and 3 seconds aboard the monohull Rambler..

The course of the race starts in Valletta, Malta and it’s around 608 miles long. It’s sailed anti-clockwise around Sicily, leaving Favignana, Pantelleria and Lampedusa to port, before heading back to Valletta towards the finish line.