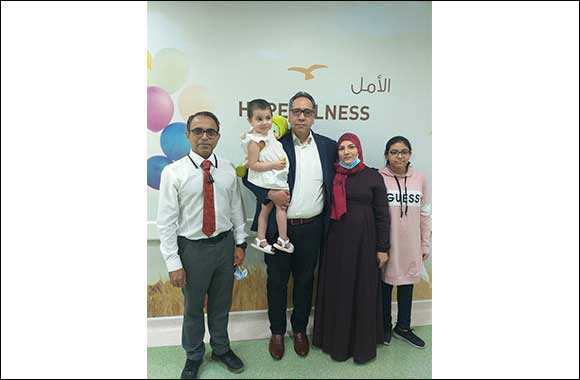 Retal and her family with Dr. Ravi Dadlani

Sharjah, UAE, 18 October 2020:  A three  year old toddler was brought to the Pediatric Emergency of Zulekha Hospital, Sharjah during the wee hours of the morning after waking up in the middle of the night due to severe headache. Retal had fallen from a height of 3 – 4 feet, while playing at home the day prior, but showed no immediate alarming symptoms like loss of consciousness, seizures, Ear or nose bleed or vomiting. She had developed a small bump at the back of her head, which is quite common during falls. Dr. Hassan Badr- Consultant Pediatrician and Dr.Ali Kaja- Specialist Paediatrician attended to the emergency and referred the case to Dr. Ravi Dadlani, Consultant Neurosurgeon for further consultation and treatment.

Retal had a similar injury on the same spot whilst falling on her head, yet again at home, 2 weeks prior that went unnoticed.
Initial CT scan performed on the child revealed a blood clot in the posterior part near the base of the skull containing the cerebellum and brain stem. The ‘chronic’ blood clot (indicating bleeding from an injury between 1- 3 weeks old) suggested of an old injury. An overlying skull fracture was also shown.
A repeat CT scan of the brain was scheduled in 6 hours to monitor Retal’s condition. The diagnosis reported a change in the density of the hemorrhage indicating an active ongoing hemorrhage within the old hematoma also called ‘Acute-on-chronic hemorrhage’.

Children often bump or bang their heads, and it can be difficult to tell whether an injury is serious or not. A head injury can be as mild as a bump, bruise, or cut on the head. Or it can be a concussion, a deep cut or open wound, broken skull bones, internal bleeding, or damage to the brain. Head injuries are one of the most common causes of disability and mortality in children. Some apparent mild injuries, managed at home, can potentially result in severe complications and require immediate medical attention.

Dr. Ravi Dadlani, Consultant Neurosurgeon at Zulekha Hospital, Sharjah commented: “Due to an enlarging blood clot and increasing headache experienced by the child, we counselled the parents and explained the need for an emergency surgery. After due consent, Retal underwent a major surgery to evacuate the hematoma.”

The two and a half hour surgery, called Craniotomy was performed by Dr. Ravi Dadlani. The surgery involved removal of a bone flap from the skull to access and clear the blood clot. A post-operative CT scan revealed complete removal of the blood clot.
The child made a rapid recovery and was discharged from hospital within five  days.

Speaking of his daughter’s condition, Mr. Mohamed Ashou, said, “I am happy to see my daughter out of danger and doing her regular activities just like before. It has been a major eye-opener for us as parents to be more careful and not neglect minor falls that happen at home. It was initially hard for us to comprehend that our three year old had to undergo a major surgery but Dr. Ravi and the team at Zulekha Hospital assured us all the support and the treatment given made us feel at home.”

“We’d like to highlight that this child had repeated head injuries while playing at home and had an expanding brain hemorrhage from a minor trauma. It is essential to draw attention to these minor injuries sustained by children at home that may result in severe complications. Parents must be educated to this possibility and whenever in doubt to get the child evaluated at a hospital.” adds Dr. Ravi Dadlani Parasram.

Keeping a close eye on children when they are climbing on furniture or playing on ground, keeping window guards on all windows, childproofing the house to minimize bruises and bumps, following age recommendations on toys, especially those with small parts, and making sure toys are in good repair are some of the safety tips to keep in mind to ensure wellbeing and security of kids at home.