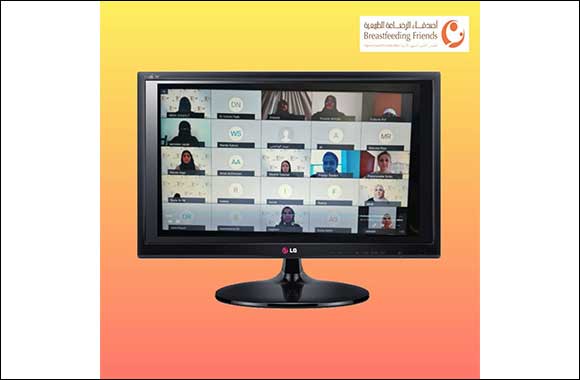 Sharjah, November 5, 2020:  Under the theme “20 Years of Giving and the march continues”, the Friends of Breastfeeding Association of the Health Promotion Department at the Supreme Council for Family Affairs in Sharjah organized on Thursday a virtual ceremony on the 20th anniversary of its establishment.

The event was attended by  Her Excellency Dr. Khawla Al Mulla, Secretary General of the Supreme Council for Family Affairs (SCFA), Her Excellency Eng. Khawla Al Noman, Head of Breastfeeding Friends Association, a number of directors and employees of government institutions in the emirate, representatives of sponsors and supporters, volunteers, representatives of the media, and a crowd of mothers.

In her remarks, Eng. Khawla Al Noman said: “This year’s slogan reaffirms our commitment to continue our ongoing efforts to get through all the challenges and make further achievements, inspired by the wise visions and directives of HH Sheikha Jawaher Bint Mohammed Al Qasimi, Wife of His Highness the Ruler of Sharjah and Chairperson of the Supreme Council for Family Affairs, to make the sons and daughters of the UAE healthier and happier.”
Al Noman showcased a number of the Association's most prominent achievements during 2020, including the increase in the number of qualified volunteers supported with necessary training and skills, whose number reached 60 volunteers between October 2019 and September 2020. In addition, the Association organized 11 forums attended by 230 mothers and provided 871 telephone consultations, while the number of awareness-raising platforms reached 30 platforms, in addition to providing training to 17 new trainees as part of the Breastfeeding Guides program (Arabic and English), including two trainees from Oman and one trainee from Saudi Arabia.

On the sidelines of the ceremony, the Association graduated the 14th batch of the Breastfeeding Female Guides Program, in addition to honoring the Association sponsors, strategic partners, and volunteers who have effectively participated in the success of the Association in achieving its objectives aimed at ensuring the proper rearing of children, maintaining their health and safety, and encouraging healthy and sound practices in society.