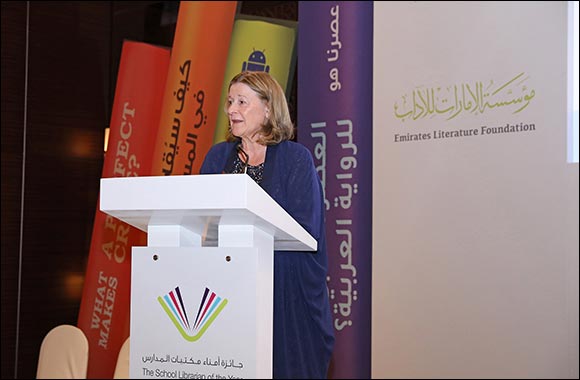 Share Home >> Banking & Investments
• Creative writing courses enables inmates to engage with literature and have their voices heard
Dubai, November 15 2020: The second year of the Emirates Literature Foundation’s ground–breaking project ‘From The Inside Out’ begins this week when two authors take up a week-long writers’ residency in Dubai Punitive and Correctional Institutions and hold concentrated creative writing workshops with a group of inmates. The project, supported by the General Department of Correctional and Punitive Institutions at Dubai Police, is the first initiative of its kind in the Arab World.
Last year saw the first ‘Writers in Residence’ scheme to be held in the jail, with the resulting collection of essays and personal reflections from the male and female inmates collated in an anthology, Tomorrow I Will Fly. This year the course will be led by editor Allison K Williams and author Jessica Jarlvi under the theme ‘Change the Story’, which is also the theme for the 2021 Emirates Airline Festival of Literature. A further writing course for Arabic speaking inmates will take place in December.
Isobel Abulhoul OBE, CEO and trustee of the Emirates Literature Foundation said that last year’s project had been a fulfilling and emotional experience. “All of us who were involved in this project were profoundly affected by it, including the inmates, the prison staff, and Clare Mackintosh and Annabel Kantaria, the wonderful authors who were the resident writers and invested so much of their time in getting the stories into print. Many of the inmates found that the process of writing down their thoughts and experiences was transformative, bringing forth new insights and enabling them to process their experiences in a very meaningful way. Writing can have such a positive impact on an inmate’s journey of rehabilitation, helping them to pave the way to their new lives on the outside.”
Abulhoul continued, “We are deeply grateful to Mr Tawhid Abdulla, who generously provided the funding to publish the book Tomorrow, I will Fly. He will also fund the next book of essays in 2021 and the monthly book clubs for inmates, which we know makes a real positive impact on the lives of those who need it the most.”
Brigadier Ali Mohamed Abdulla Al Shamali, Director of the General Department of Punitive and Correctional Institutions at Dubai Police, said that the Commander-in-Chief of Dubai Police, Lt. General Abdullah Khalifa Al Marri consistently emphasizes the role of police in preserving human rights for all society members and ensuring that Dubai inmates are involved in all relevant initiatives that positively reflect the UAE's efforts in this field.
Brig. Al Shamali also confirmed the Department’s keenness on providing the inmates with the means necessary to enhance and improve their creative skills in the cultural sphere. To achieve this, the Department enrols the inmates in educational and training programmes to sharpen their writing skills and give them opportunities to land proper jobs after they have served their sentences. In addition, the Department also facilities the inmates’ smooth return to the society where they can financially support themselves and their families.
'The cooperation between Dubai Police and the Emiratis Airline Festival of Literature is a great initiative dedicated to the inmates’ cultural welfare. Last year, the initiative proudly organized visits from Dubai-based and international authors to inmates to discuss books and the art of writing. The year-long initiative was later crowned with the publication of Tomorrow, I Will Fly - a collection of essays and personal reflections written entirely by the inmates,” Brig. Al Shamali added.
The ‘From the Inside Out’ project stems from a long-term initiative by the Emirates Literature Foundation, with the assistance of Dubai Police and Dubai Central Jail, which takes Dubai-based and international authors to the prison every month to engage with inmates and discuss books and the process of writing. After visiting the prison in 2019 as part of this programme, the best-selling writers Clare Mackintosh (I See You, Let Me Lie), and Annabel Kantaria (Coming Home, The One That Got Away), saw an opportunity to develop the initiative and help the prisoners find their voices and tell their stories. These stories were collated in the book, Tomorrow, I Will Fly, which was launched at the Emirates Airline Festival of Literature earlier this year. Copies of the book were made available to other prisons in the UAE, the Arab World and further afield, including prisons in the UK. It is now also available as an ebook and the launch of the book was recorded on a podcast.
Allison K Williams has edited and coached authors to win deals with the world’s biggest publishing houses, and inspired thousands of writers with her Brevity blogs and Rebirth Your Book, a series of finish-your-book writing retreats. She has appeared on National Public Radio in the US and CBC-Canada, and her work has been published in noted literary magazines and the New York Times.
A winner of the Montegrappa, the Emirates Airline Festival of Literature’s former writing prize, Jessica Jarlvi’s debut novel, the psychological thriller When I Wake Up, featured on bestseller lists in the US and Australia, and was selected “Book of the Year” by Magrudys in 2018. Her latest book, What Did I Do? deals with mental health and human trafficking.