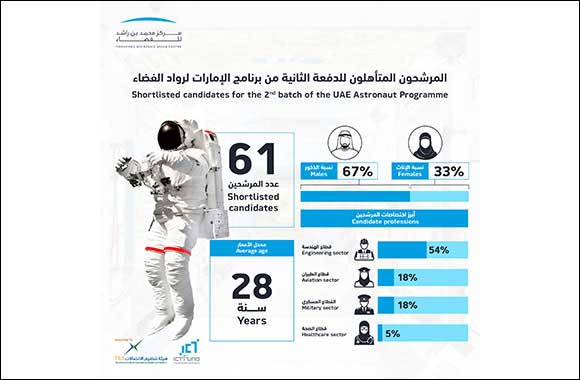 Share Home >> Travel & Tourism
• The candidates have been shortlisted from 4,305 applicants
• The Programme is aimed at further strengthening the UAE’s position in human space flight
Dubai, UAE, 15 November 2020: The Mohammed Bin Rashid Space Centre (MBRSC) today announced that 61 out of 4,305 applicants have been shortlisted for the second batch of the UAE Astronaut Programme, that aims to find the next two astronauts who will join the UAE’s astronaut corps and further the country’s ambition for crewed space missions.
4,305 applicants had applied for the second batch of the UAE Astronaut Programme, which was a 7 percent increase from the first batch. The list was filtered down to 2099 applicants based on their age, educational background, and scientific research experience. The applicants then underwent an online test, through which the best 1,000 candidates were selected. In the next phase, the 1,000 candidates were made to undergo IQ, personality, and technical assessments. The top 122 from the 1,000 were interviewed virtually, bringing the shortlist down to 61 candidates.
The shortlisted candidates include 41 men (67%) and 20 women (33%) from across the UAE.  The average age of the applicants stood at 28 years old, with the youngest candidate being 23 years old and the oldest 39 years old. The applicants have diverse educational backgrounds, with 3 of them holding a PhD, while 12 have a master’s degree. In terms of profession, 54% of the applicants were from the engineering sector, 18% from the military sector, 18%from the aviation sector and 5% from the healthcare sector.
MBRSC has further announced that the 61 candidates are currently undergoing advanced medical tests. A select number of candidates will be shortlisted after this for an initial interview to be conducted by a committee from MBRSC. Candidates that make it through the initial interview will move on to the next round, where they will have a final round of interview conducted by a panel of experts from MBRSC, including astronauts Hazzaa AlMansoori and Sultan AlNeyadi. Two candidates will then be selected from the final list to form the second batch of the UAE Astronaut Programme.
H.E. Yousuf Hamad Al Shaibani, Director General, Mohammed Bin Rashid Space Centre, said: “The UAE Astronaut Programme is moving steadily towards achieving the goals of the UAE’s space sector and the vision of the wise leadership. Our ambition to strengthen the UAE's position among leading countries in the space sector is the foundation under which the Programme was established.  Under the guidance of the UAE’s leadership, the national space sector has today become the gateway to scientific progress for the future. Building on our strategy in the space sector and solid foundations, our goal now is to continue to focus on developing a national cadre of astronauts capable of achieving the nation's ambitions in this field at the highest international levels and support future space exploration missions.'
He added: 'We have reached an important stage in the Programme’s journey to select the second batch of Emirati astronauts, who will participate in scientific missions in space. We are also proud of the Centre’s Emirati experts and the efforts they have put in to find the right candidates for the Emirati astronaut corps. Our capabilities in the space sector continue to grow at a rapid pace, and the two new Emirati astronauts will add great momentum to strengthening the ambition of the UAE's space exploration missions.'
Salem AlMarri, Assistant Director General for Scientific and Technical Affairs and Head of the UAE Astronaut Programme, MBRSC, said: “When we launched the UAE Astronaut Programme, we had a clear goal of developing Emirati talent and local capabilities that contribute to our leadership’s vision of making the UAE a hub for space science and technology. The second batch of the Programme aligns with this vision as we continue to seek the skills and expertise that enable us to enhance our knowledge in the space sector.”
He further added: “The UAE Astronaut Programme is an integral part of the UAE’s National Space Strategy and is one of the key pillars for enhancing our knowledge in this sector. The Programme has contributed to the formation of a highly capable Emirati astronaut corps, which will help the UAE achieve its aspirations for future space exploration.”
As part of a joint cooperation agreement between the UAE and the US, the two new astronauts will join the NASA Astronaut Candidate Class of 2021 and train at the Johnson Space Centre in the US. The Emirati astronauts will undergo the same training programme as those of NASA astronauts, which will help them prepare physically and psychologically for future space exploration missions.
The final selected candidates will undergo an intensive multi-stage training programme, in accordance with the highest international standards. They will first undergo a basic training phase, during which they will learn the objectives and plans of the programme, the basics of scientific disciplines, including space engineering and scientific research, as well as procedures and regulations of the International Space Station. Candidates will also learn Russian, get trained on scientific research procedures in space and then move on to the advanced and intensive training phase. During this phase, candidates will learn to maintain and manage payloads, as well as a range of skills including robotics, navigation, medical aid and resource management. All this will enable astronauts to be eligible to participate in missions to the International Space Station.
The UAE Astronaut Programme is one of the projects managed by the UAE’s National Space Programme and funded by the ICT Fund of the Telecommunications Regulatory Authority (TRA), which aims to support research and development in the ICT sector in the UAE and promote the country’s integration on the global stage.

Sheraa Sets the Stage for Global Experts and Influential Changemakers at 4th Sh ...