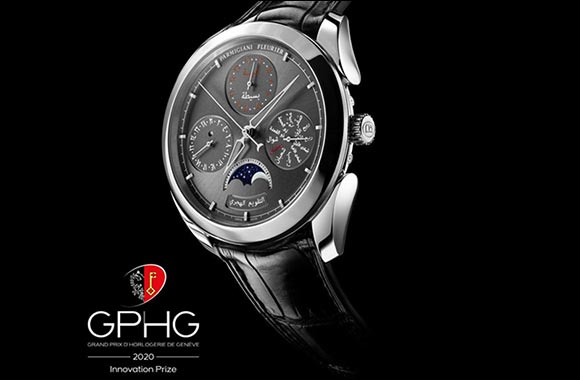 'The calendar is an eminently fascinating watchmaking complication, as it really is the mirror of civilizations.' Michel Parmigiani

United Arab Emirates -  November 19, 2020:   Earlier today, Parmigiani Fleurier was proud to receive the prestigious Innovation Prize from the Grand Prix D’Horlogerie de Genève for its creation of the first Hijri perpetual calendar wristwatch. The prize is awarded by the Jury on a discretionary basis to reward the best competing watch offering an innovative and unique vision of time measurement, and for opening up new pathways for the art of watchmaking.

The Hijri Perpetual Calendar features a 44.5 mm platinum case, a slate dial and rotor in platinum. It shows the hours and minutes, and date in Arabic numerals, the name and length of the months in Arabic calligraphy, as well as the abundant and the common years. It also features a moon phase in an aventurine sky and a power reserve of up to 48 hours. As seen in all Parmigiani Fleurier timepieces, every single component of the movement, even the hidden parts, are decorated by in-house specialists.

Parmigiani Fleurier is often inspired by its work in restoration and is firmly rooted in the history and tradition of watchmaking. The original development of this stunning timepiece dates back to 1993, when Michel Parmigiani restored a simple Hijri Calendar and a pocket watch from the end of the 18th or beginning of the 19th Century that featured a solar calendar translated into Arabic. This led Mr. Parmigiani to create the first-ever Hijri Calendar table clock, and today to the first wristwatch featuring this complication. The Hijri Perpetual Calendar has been carefully designed in consideration of the most intricate elements of Arabic architecture, culture, and religion. It is the culmination of centuries worth of technical knowledge, combining both culture and high horology, and beautifully showcasing the high standards in innovation and hand-crafted expertise the Maison is known for.

“We would like to thank all the people who collaborated with us on this incredible project,” said Davide Traxler, CEO of Parmigiani Fleurier. “At Parmigiani Fleurier we stand strong in our belief in solidarity, in the power of community, in being inspired by the work of greats who have come before us, in inspiring future generations, and sharing the gifts of watchmaking with industry colleagues and those around the globe who appreciate the artistry of our work. The international community of watch admirers and devotees is a motley of cultures and traditions; we celebrate this diversity in our own way with the Hijri Perpetual Calendar, and we hope that- as an industry and as citizens of the world-  we will also embrace it in the people we choose to represent and lead us.”

Parmigiani Fleurier sought the expertise of Mr. Stefano Macaluso to redesign each of the bridges of the new PF009 movement. The bridges are inspired by the typical arches of mosques and adopt the shape of growing and shrinking crescent moons. The Rub el Hizb, an Islamic symbol represented by two overlapping squares which in Arabic calligraphy marks the end of a chapter, is often used in the holy book of Quran and is also represented in this design to honor the cultural richness of the Arab world through modern watchmaking.

'The decoration inspiration for the Parmigiani Fleurier Hijri Perpetual Calendar was drawn from the architecture of the Arab world, highlighting all of its aesthetic codes, each more beautiful than the next, while keeping in mind an evocative and quickly understandable visual vocabulary,” said Stefano Macaluso.

In the Muslim world, the calendar is based on the cycles of the moon. The Hijri or Islamic lunar calendar consists of twelve months of 29 or 30 days – depending on the moon phase- and is used to pinpoint the days for Islamic holidays. In contrast to the solar calendar, which is used in the west, the months of the lunar calendar change annually by a difference of -10 to -12 days. As a result, each month always falls on a different season and therefore varies from the Gregorian Calendar.

PARMIGIANI FLEURIER
Taking its name from its founder, watchmaker and restorer Michel Parmigiani, the fine watchmaking brand was founded in 1996 in Fleurier, in the Swiss valley of Val-de-Travers. With its own watchmaking centre ensuring its independence, the brand has both full control over the production process and unique creative freedom. For over twenty years, the Parmigiani Fleurier signature has resided within timepieces that command the utmost respect, in harmony with watchmaking traditions. They are the labour of a lifetime – that of Michel Parmigiani, the talented individuals who assist him, and the special relationship between the Manufacture and the masterpieces of the past, enabling it to invent a bold future.