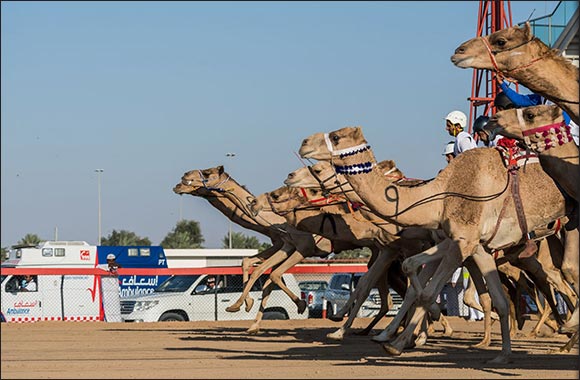 Dubai, November 23, 2020:  The first preliminary camel race prior to the sixth edition of the National Day Camel Marathon, will be held next Friday, 27th of November, in Dubai’s Al Marmoom racetrack. The race, organized by the Hamadan Bin Mohammed Heritage Center (HHC), is one of two races introduced by the Center last season.

Each preliminary camel race comprises of two matches. The first, showing debut this season, is dedicated to participants 29 years of age and below. The second match is for participants above the age of 30.

For her part, Souad Ibrahim Darwish, Director of Championships at HHC said, “Owing to the success reaped in last season’s prep camel races and the demand by Emirati youth, we have introduced a new match to the two races covering another age group (below 29 years) to cater to the constant demand. This will create equal opportunities to empower and prompt riders for the upcoming National Day Camel Marathon with a distance of 11km, which will be held in conjunction with the Arabian Camel Festival under the patronage of HH Sheikh Hamdan Bin Mohammed Bin Rashid Al Maktoum, Crown Prince of Dubai. The new matches will increase the prize money to 100 thousand AED per race, and will thus prompt Emiratis to buy, raise, ride camels and join the annual races. A vital sector that the UAE pioneers in its quest to sustain an important part of our intangible cultural heritage”.