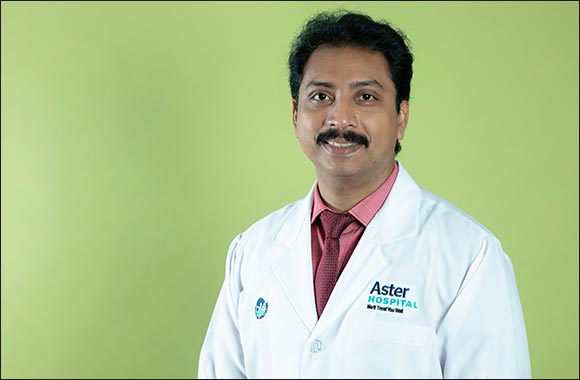 Rare Case of Bowel Obstruction, Treated Laparoscopically at Aster Hospital in Qusais, Allows Patient to Recover Within a Week

Share Home >> Healthcare & Medicine
• Meckel’s diverticulum is an uncommon cause of intestinal obstruction in adult life which is found in only 1-3% of the general population
• Rarely Meckel's diverticulum is complicated by a mesodiverticular band, which can lead to intestinal obstruction and gangrene of the gut. This abnormality is associated with high mortality.  At Aster Hospital in Qusais, the patient was treated laparoscopically which ensured better and faster recovery
Dubai, UAE, 25 November, 2020: A 49-year-old, east-Asian, male patient with no history of abdominal surgery, was presented at Aster Hospital, Qusais with unbearable abdominal pain, vomiting and a swollen abdomen. He was diagnosed with a rare case of a small intestine bowel obstruction which if left untreated would have caused major complications. The medical team took an unconventional approach to treat the case which reduced his recovery time from 3 months to less than 1 week.
In medical terms, he was diagnosed with an obstruction of the bowel due to the Mesodiverticular band in Meckel’s diverticulum, a condition where there is a blockage in the small intestine, causing immense abdominal pain to the patient. If not treated, it can lead to several long term and life threatening complications.
Traditionally, an intestinal obstruction is treated by cutting open the abdomen (known as laparotomy) which can usually take months to recover from, in addition to various complications that may arise post-surgery. However, in this case, the procedure was done through a minor incision (laproscopically) and the obstruction was removed by cutting out the band causing obstruction and removing the bulge or outpouching known as Meckel’s diverticulum.
Talking about the case, Dr Reji Chandran, Specialist General Surgeon at Aster Hospital, Qusais stated, “Meckel's diverticulum is a bulge in the lower part of the small intestine caused due to a leftover of the umbilical cord during birth and as per a NCBIreport, it occurs in about 1% to 3% of the general population but causes symptoms in only a small number of people. Many people may not even show any symptoms their entire life. Obstruction of the bowel due to the Mesodiverticular band in Meckel’s diverticulum is an extremely rare disorder and we treated it laparoscopically which significantly reduced patient’s, pain, morbidity and recovery time.”
Patients with this condition, who show symptoms such as hemorrhage, intussusceptions, small bowel obstruction, infections in intestines and/or a rupture in the bowel, treatment should be done immediately or may lead to serious morbidity or even mortality.
Dr Ramanathan V, Group Medical Director for Aster & Medcare Hospitals and Clinics, added, “When Meckel's diverticulum is associated with congenital bands, this could lead to bowel obstruction and gangrene, which is a serious condition. This was one such case, but our doctors were able to diagnose and treat appropriately on time. The operation was done laparoscopically, which reduced recovery time of the patient to less than a week, when compared to traditional laparotomies which take about 3 months to recover from.”
Post-surgery, the patient recovered without any complications and was discharged after 3 days of hospitalization.