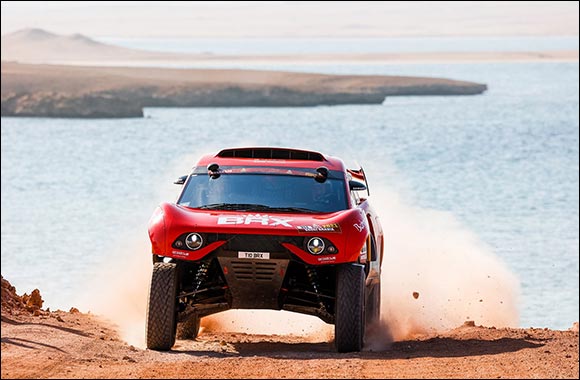 Share Home >> Automobile
STAGE NINE: NEOM TO NEOM
DISTANCE: 579KM (114KM ROAD / 465KM SPECIAL STAGE)
United Arab Emirates -  January 13, 2021:   Stage nine of the Dakar Rally took competitors around a looped stage, leaving and returning to Neom; 579km in total, with 114km of road and 465km of special stage driving.
Bahrain Raid Xtreme driver, Nani Roma, was reunited with his support team after two days of the marathon stage, with no overnight assistance. Roma began the day’s stage on the shores of the Red Sea, tracking the coast for a stage of mixed driving conditions; sandy coastline followed by rocky terrain.
The two-time Dakar Rally winner experienced almost no problems throughout the lengthy stage, paying testament to the Hunter’s competitiveness, returning the BRX T1 car to the bivouac in an almost immaculate condition, despite a long and testing day of driving.
Roma continued his consistent run of form through stage nine, finishing in 10th with a stage time of
05:12:06, +21:39 behind the leader. This result means Roma maintains his position in 5th overall,
+2:42:38 behind the leader, reducing the gap to fourth place by 16 minutes and is now just 26 minutes
behind Jakub Przygonski.
Commenting after arriving back at the bivouac in Neom, Bahrain Raid Xtreme driver, Nani Roma said: “At the beginning of the stage it was very beautiful, right next to the sea. Then we went into the rocky areas, which I didn’t like very much. It was a really long stage, but we did well. Alex did a good job on navigation and I tried to be as focused as possible. The car was fantastic, and we are looking forward to tomorrow. We will go out and try not to make any mistakes and see how we do - catching fourth is definitely possible.”
Speaking from Neom after his forced withdrawal from the Dakar Rally following yesterday’s marathon stage, Bahrain Raid Xtreme driver, Sebastien Loeb said: “This isn’t the result we were expecting. When we arrived here in Saudi, we wanted to secure a top position. In the end it was a bit complicated, but we know that Dakar is a tough race. Overall, I think we had a good performance; the Hunter showed good pace and reliability. We had two main problems that made us lose a lot of time – they are not big problems and will be easy to solve ahead of our next races. I am not worried about that. I am sorry that we have had to stop the rally early, but I’m confident so it’s looking good for the future.”
Speaking in Neom after stage nine, BRX Chief Engineer, Richard Thompson, added: “Yesterday’s marathon stage was obviously hugely disappointing for the team and resulted in Sebastien Loeb having to retire from the rally. We redoubled our efforts on Nani’s car last night, doing a bigger service than we would usually do on a standard evening to ensure we had a trouble-free day today, which we did. Nani had a great day, with barely any issues, so we are really pleased about that. The competitiveness of the Hunter is clear, and we will be keeping our focus on the cars in front for the rest of the stages. We are using each stage as a learning for 2022 where we’ll be going after the win, rather than protecting our position, as we’ve had to do this year.”
Stage ten of the Dakar Rally continues through the dunes’ hilly areas, heading from Neom to AlUla; 583km in total, with 241 km of road and 342km of special stage driving.