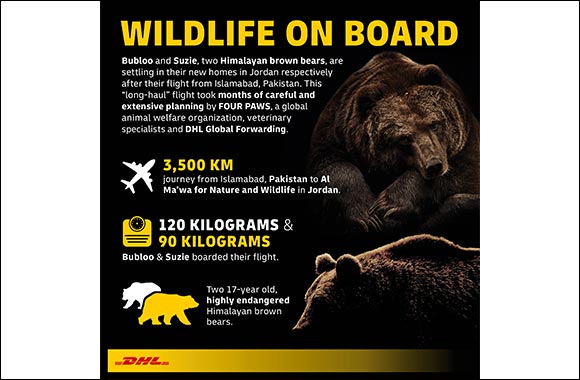 Share Home >> Shipping and Logistic
 The two highly-endangered bears are settling in Al Ma'wa for Nature and Wildlife in Jordan after a temperature-controlled multimodal journey from Islamabad
 DHL took care of the customs clearance and logistics, while global animal welfare organization FOUR PAWS provided animal expertise
Dubai, 14 January, 2021:  Bubloo and Suzie, two 17-year old highly-endangered Himalayan brown bears, took the flight of a lifetime and have safely arrived at Al Ma'wa for Nature and Wildlife in Jordan. After months of extensive planning, which included health checks, customs clearance and training for the bears, DHL Global Forwarding and FOUR PAWS, a global animal welfare organization, brought Bubloo and Suzie to their new home on 17 December.
“Our purpose at DHL is to connect people and improve lives – our furry friends included! Not many people know that it’s not as straightforward to help animals relocate and it makes this especially meaningful and fruitful for our teams when we can leverage our logistics expertise, temperature-controlled capabilities and customs clearance solutions to help Bubloo and Suzie find sanctuary in their new home in Jordan. Big kudos to our teams in Asia and Middle East for coordinating everything and bringing on another level of excellence, simply delivered,” said Amadou Diallo, CEO, DHL Global Forwarding Middle East and Africa.
The freight forwarding specialist of Deutsche Post DHL Group managed the logistics of flying the animals, while veterinary specialists from FOUR PAWS, who accompanied them on flight, provided insights to make the journey comfortable for the bears. DHL chauffeured the Bubloo and Suzie, weighing 120 kilograms and 90 kilograms respectively, to the Islamabad International Airport in custom-built crates that adhere to the International Air Transport Association’s regulations. From there, they boarded their flight to Jordan with a short layover in Doha.
“We are pleased to report that, after their first-class flight experience that ended at the Queen Alia International Airport, Bubloo and Suzie are thriving in their new home. The months of detailed planning with DHL in coordination with local Pakistan officials and the financial help of American businessman Eric S. Margolis, have paid off as the bears begin to build their new lives at Al Ma'wa for Nature and Wildlife, a sanctuary run by the Princess Alia Foundation and FOUR PAWS,” said Dr. Amir Khalil, FOUR PAWS veterinarian and leader of the rescue mission.
On 30 November, DHL and FOUR PAWS relocated Kaavan, also known as the world’s loneliest elephant, from the Marghazar Zoo in Islamabad to the Cambodia Wildlife Sanctuary. In previous years, DHL successfully helped four grown endangered Ussuri brown bears travel across continents from Japan to England, and sent two giant pandas on a climate-neutral journey from China to Finland.

Previous in Shipping and Logistic

Next in Shipping and Logistic

Mark March 21 on your Calendars, it's MAMA's DAY!

Twitter Introduces Labels for the COVID-19 Vaccine as It Continues Its Fight Aga ...