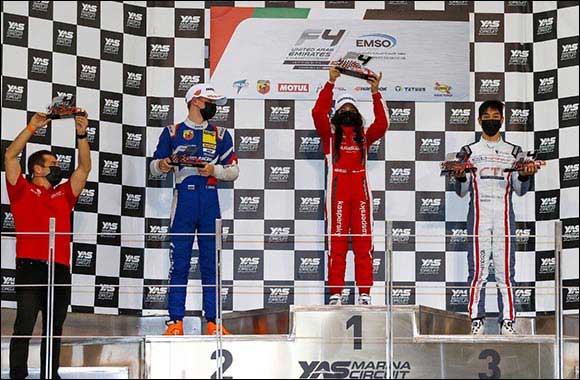 The second of five rounds of race action took place at the home of the FORMULA 1 ETIHAD AIRWAYS ABU DHABI GRAND PRIX with Al Qubaisi, of Abu Dhabi Racing, looking to build on the solid start she had made last week at Dubai Autodrome.

It was in Race 4 that the young Emirati driver triumphed as she performed brilliantly from start to finish, navigating her way into first place having started fourth on the grid and crossing the line ahead of Xcel Motorsport duo Kirill Smal and Tasanapol Inthraphuvasak, who finished second and third respectively.
Al Qubaisi displayed fantastic character to secure two podium finishes over the course of the weekend having finished the opening race in fifth place.
She bounced back brilliantly in Race 2, earning a spot on the podium courtesy of a third-place finish behind Xcel Motorsport’s Dilano Van’t Hoff, who continued where he left off last week with some strong performances, and Cram Durango’s Enzo Trulli.

In Race 3, Al Qubaisi had to settle for fifth once again as Van’t Hoff claimed another victory, but her finest moment was just around the corner as she performed incredibly well in Race 4, recording an impressive time of 20:05.420 to seal her first win in this year’s event.
Round 3 of this year’s F4 UAE competition takes place on 28-30 January at Dubai Autodrome.
It was a busy weekend of racing at Yas Marina Circuit, with Hankook 6H Abu Dhabi and Gulf Radical Cup action also taking place.
Car Collection Motorsport were victorious in the Hankook 6H Abu Dhabi, displaying fantastic quality to respond to an early setback when they dropped to 11th place during a chaotic opening lap.
However, the German team recovered well and, through a combination of excellent driving and efficient pitwork, finished three laps ahead of closest rivals Leipert Motorsport.
In the Gulf Radical Cup, meanwhile, victory went to Alex Khateeb, with Corbett-Winslow and Tarik Kerbouci finishing second and third respectively.
Round 2 of Yas Racing Series, which features F4 UAE and the F3 Asian Championship, takes place at Yas Marina Circuit on 4-7 February. Round 3, including F4 UAE, the F3 Asian Championship and Asia Le Mans, will be held on 18-20 February and Round 4, which features UAE Time Attack, is scheduled for 18-20 March.