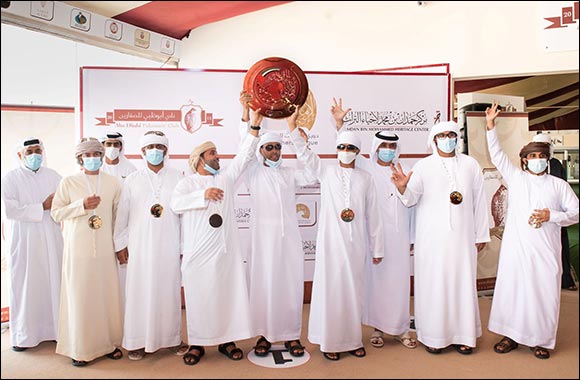 Share Home >> Entertainment
• Sheikh Hamdan’s Team F3 rules Sheikhs Category while Team Rabdan retains General Public category
Dubai, February 21, 2021:  The second edition of UAE Falconers League, a collaboration between the Hamdan Bin Mohammed Heritage Center (HHC) and Abu Dhabi Falconers Club, concluded on a high note yesterday, Friday 19th of February, in Abu Dhabi.
Team F3, the falconry team of His Highness Sheikh Hamdan bin Mohammed bin Rashid Al Maktoum, Crown Prince of Dubai, ruled the Sheikhs Category while Team Rabdan has retained dominance in the General Public category. Six falconry teams participated in the Sheikhs Category that was introduced for the first time in the UAE Falconers League.
Team F3 finished the competition with 13 points, followed by the M7 team with 11 points, and the Al Dhafra team with 10 points. Fourth place went to F-3S with 6 points while Al-Nef and Baynouna had one point each. Team F3 sealed its title after a draw in a decisive race against M7 with a score of 2-2 in the last round that was held on Friday, February 19.
Meanwhile, Rabdan team has retained the General Public category title for the second year in a row, after finishing the season with a score of 9 wins to collect 27 points. Team Nomas followed in second place with 19 points, and Dubai team came third with 16 points.
Awarding
The winners were crowned by Sultan Al Mahmoud, Executive Director of the Abu Dhabi Falconers Club and Chairman of the Joint Organising Committee of the UAE Falconers League; Rashid bin Markhan, Deputy CEO of HHC and and Vice-Chairman of the Organising Committee; and Demaithan bin Suwaidan, Chairman of the Organising Committee of the Fazaa Championships for Falconry.
Al Mahmoud noted: 'The concerted efforts between the Abu Dhabi Falconers Club and HHC have certainly raised higher the sport of falconry. We are happy with the level of competition and strength in it, especially the Sheikhs Category, which was launched for the first time this year and in the General Category that has only grown stronger and more competitive.”
Bin Markhan thanked the guidance and support of the wise leadership to the League. “Having an additional category was a positive step for the Championship as we have seen how it has grown rapidly and extensively through the years. In the end joint efforts have to led to sustaining the sport of falconry and deepened it roots in the country’s and region’s cultural heritage.”
Strong competition
Khalifa bin Mejren, team leader of Team F3, commended the strong competition in the Sheikhs category, with the falconers bringing their best falcons for the race. He commented: “Everyone came prepared for the race. The strong competition showed that not even the coronavirus pandemic could hamper the race.”
Rabdan falconer Khalfan Butti Al Qubaisi added: “There is always a special bond among Emiratis brought about by our love and passion for falconry. Our success in retaining the title was because of our team work and determination”.


Abbott Researchers Find Rare Group of People with Controlled HIV Who Could Be a ...