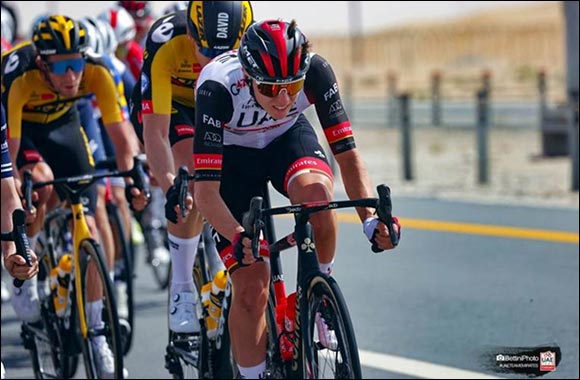 Share Home >> Entertainment
United Arab Emirates -  February 22, 2021:  UAE Team Emirates laid down a strong marker today as starlet and GC favourite Tadej Pogacar finished sixth after a frantic, crosswind-affected opening stage of the UAE Tour.
The World Tour season got off to an emphatic start as the peloton battled against the elements in what was a hectic and hard day in the saddle.
What was supposed to be a sprint stage, was turned upside down by cross winds and echelons meaning that only Pogacar, Adam Yates (Ineos Grenadiers) and Joao Almeida (Deceuninck-Quickstep) avoided losing time on the GC.
The stage originally promised to be a relatively straightforward transition back into top level racing for the riders, thanks to a flat parcours and no category climbs but strong winds on the exposed roads made for a frantic day of racing from the outset.
After a brief period of downtime after the first split, four sizable groups were strewn out across the road in picturesque formations. The front group included four UAE Team Emirates’ riders; Fernando Gaviria, Max Richeze, Mikkel Bjerg and Tadej Pogacar as the team dug deep to protect the Slovenian from the winds and ensure he didn’t lose ground on his GC rivals.
Dutchman, Mathieu van der Poel (Alpecin-Fenix) eventually took the stage and triumphed in his first ever bunch sprint finish after Fernando Gaviria jumped too early and didn’t have the legs to hold on.
The peloton, with a number of big-name sprinters and GC contenders, finished over eight minutes behind stage winner Van der Poel meaning Pogacar picked up valuable time ahead of his challengers and emerged as one of three early favourites for the GC.
Pogacar said: “It was a really hard stage with the wind, but in the end our team did a super good job with four guys in the front group. Sadly, we missed the stage win, but I think we showed that we are strong and up for the fight. We were there at the front and we’ve set ourselves up well for the next few days.“
Attention now turns to Stage 2 as Pogacar and his rivals look to fight for every second in the 13km individual time trial at Al Hudayriat Island.
Stage 1 Results
Mathieu Van Der Poel (Alpecin ) 3:45:47
David Dekker (Jumbo-Visma) s.t
Michael Morkov (Deceuninck-Quickstep) s.t
Tadej Pogačar (UAE Team Emirates) s.t
General Classification after Stage 1
Mathieu Van Der Poel (Alpecin ) 3:45:47
David Dekker (Jumbo-Visma) +4’’
Michael Morkov (Deceuninck-Quickstep) +6’’
Tadej Pogačar (UAE Team Emirates) +8’’


Abbott Researchers Find Rare Group of People with Controlled HIV Who Could Be a ...