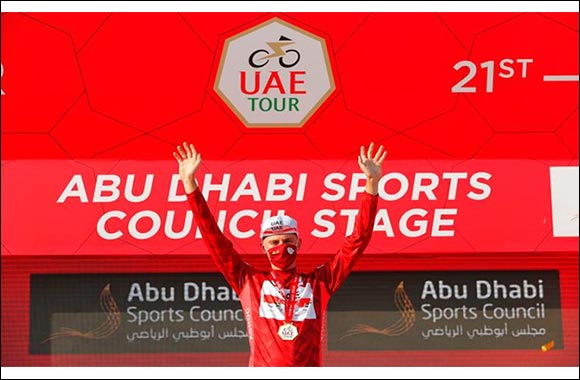 Share Home >> Entertainment
United Arab Emirates -  February 22, 2021:    Tadej Pogacar once again proved why he is the Tour favourite after taking home the best young rider and race leader’s jerseys.
After the crosswinds and major GC shakeup on stage one of the race, the pan-flat time trial on Hudayriat Island was another opportunity to make valuable time and the Slovenian did just that putting him in pole position for the GC.
It was also a solid performance from Pogacar’s teammate Mikkel Bjerg who made the podium in third place, finishing 21 seconds behind pre stage favourite Flippo Ganna (Ineos Grenadiers) whom claimed his eighth straight time trial victory.
Pogacar finished in fourth and now leads the race by six seconds ahead of rival Joao Almeida (Deceuininck-Quickstep).
Pogacar said: “The wind was quite strong in the end, but I did my best and got a really good time. I knew my capabilities and performed even better than expected if I’m honest. We’ll take things day by day but we’re happy to take the leaders’ jersey and will defend it until the end. We’re optimistic and I’m really happy.
“It didn’t matter before the start how good Almeida would do, I just concentrated on myself and did the best I could. It was a really good performance from my side.
“Five seconds isn’t much of an advantage. I am defending, he is attacking so it’s better for me to control but we will see; there are still five stages to go. Tomorrow is the hardest mountain finish, so I hope I have the best legs. It’s a bit of an advantage that I know the route but if you have good power on the climb it doesn’t really matter if you know every metre. In the end the best rider will be the first to the top.”
Stage 2 Results
Flippo Ganna (Ineos Grenadiers) 13’:56”
Stefan Bissegger (EF Education-Nippo) 00:14”
Mikkel Bjerg (UAE Team Emirates) 00:21”
Tadej Pogacar (UAE Team Emirates) 00:24”
General Classification after Stage 2
Tadej Pogacar (UAE Team Emirates) 4:00:05
Joao Almeida (Deceuninck-QuickStep) 00:05”
Mattia Cattaneo (Deceuininck-QuickStep) 00:18”