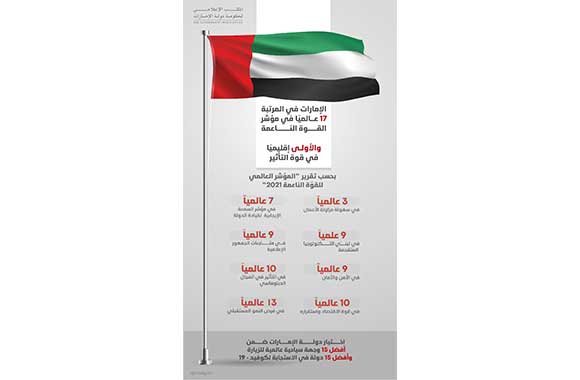 Share Home >> Government, Legal & Humanity
Emirates Mars Mission improves UAE’s overall Soft Power score by 5% compared to last year
UAE moves seven places up from last year in the ‘Respected Leaders’ category to reach the 7th globally
The Index was launched in the virtually-held Global Soft Power Summit attended by decisionmakers and specialists
Mohammed bin Rashid: The UAE is not a place in the globe, but the globe in one place
• UAE sits at the top 10 for its strong and stable economy
• UAE ranks 9th globally in ‘affairs people follow closely’, climbing 8 places up from last year
• UAE classified among top 15 countries in the world in COVID-19 response and future growth potential
• The General Public selected UAE among top 14 great places to visit
• UAE improves rankings in governance, education and science, and people and values compared to last year
• UAE’s highlighted rankings:
o Ease of doing business (3rd worldwide)
o Leading-edge technology (9th worldwide)
o Affairs people follow closely (9th worldwide)
o Safe and secure (9th worldwide)
o Influential in diplomatic circles (10th worldwide)
o Strong and stable economy (10th worldwide)
Dubai, February 27, 2021:  The UAE has been ranked the first in the Arab region and 17th worldwide, up from last year’s 18th ranking, in the Global Soft Power Index 2021.
The UAE’s overall Soft Power score improved by 5 per cent, thanks primarily to the Emirates Mars Mission that boosted the country’s influence and enhanced its status on the global sphere.
According to the Global Soft Power Index 2021, the UAE sits at the top in the Middle East, and among the top 10 nations in the world, in the ease of doing business, respected leaders, safety and security, leading-edge technology, affairs people follow closely, influence in diplomatic circles, and strong and stable economy.
His Highness Sheikh Mohammed bin Rashid Al Maktoum, Vice President and Prime Minister of UAE and Ruler of Dubai, “The Global Soft Power Index 2021, which involved 77,000 respondents across 105 nations, ranked the UAE as the 17th globally and the first regionally in its overall influence. The UAE was also ranked in the top 15 globally for its COVID-19 response.”
He added, “The UAE has been ranked the 9th globally for affairs people follow closely, moving up 8 places from last year. The international public named the UAE among the top 10 nations in the world with a strong and stable economy, safety, security and diplomatic influence.”
He stressed that “The UAE will continue to build bridges with people across the world and establish positive economic and developmental relations with other nations. The UAE is not a place in the globe, but the globe in one place.”
Regional and Global Influence
The 2021 index, which interviewed 77,000 respondents and over 750 specialists from 105 nations worldwide, was launched during the virtual Global Soft Power Summit that brought together policymakers, diplomats and experts including Hilary Clinton, former US Secretary of State, Professor Joseph Nye, soft power expert at Harvard University, Carl Bildt, former prime minister of Sweden, and George Yeo, foreign minister of Singapore.
The index evaluated the familiarity and influence and global reputation of nations on the main pillars of international relations, business and trade, education and science, people and values, governance, and media and communication. The index also measured the COVID-19 response of governments in a newly-launched category.
The General Public reported growing positive perceptions of the UAE in the fields of education and science, governance, and people and values. According to the index, the widespread positive media coverage on the success of the Emirates Mars Mission helped boost perceptions of the UAE on ‘leading-edge technology’.
COVID-19 Response
According to the index, the UAE’s COVID-19 response has been ranked the highest in the Middle East and in the top 15 globally. The UAE’s efforts in facilitating international aid during the pandemic and its mass vaccination drive were widely praised in the index.
Top 3
The General Public placed the UAE among the top three countries in the world with ease of doing business, moving the country one place ahead of last year’s 4th ranking.
Hope Probe
The success of the Hope Probe in entering Mars’ orbit on Feb. 9, 2021 in the first Arab interplanetary mission inspired the international public to rank the UAE in the 7th place in the ‘Respected Leaders’ category and the 9th in the ‘affairs people follow closely’ category, moving eight places up from last year’s ranking.  The widespread positive media coverage of the probe boosted UAE’s reputation and diplomatic influence in the global sphere.
Leading-edge Technologies
In the science and education pillar, the Emirates Mars Mission enhanced UAE’s global perceptions, placing the country as the 9th in the world in ‘leading-edge technology’, improving by four rankings from last year.
Strong and Stable Economy
The General Public has rated the UAE among the top 10 nations with a strong and stable economy.
Influential in Diplomatic Circles
Besides rating the UAE as the 9th safest and most secure country in the world, the General Public also ranked the UAE as the 10th most influential in diplomatic circles.
Regional Soft Power Leader
The index has ranked the UAE as the Middle East’s most influential nation and the 12th in the world in its soft power influence, indicating its geopolitical, strategic and diplomatic presence on regional and international spheres.
Influential Media
The General Public classified the UAE as the 13th nation with most influential media and future growth potential.
A Great Place to Visit
In the index, the General Public ranked the UAE as the 14th greatest place to visit in the world and among the top 20 nations with a rich heritage and an appealing lifestyle.
The UAE had launched the “World’s Coolest Winter” campaign at the end of 2020 to promote domestic tourism and engage the public to discover the country’s hidden gems. The campaign generated Dh1 billion in revenue within a month and attracted 950,000 domestic tourists.
The UAE’s projects and campaigns have lately boosted its influential presence and consolidated its role as a global player.