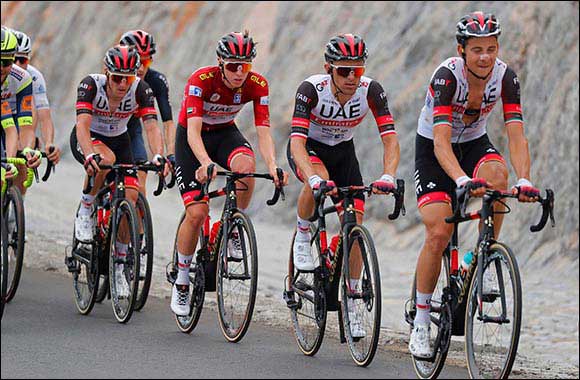 Share Home >> Entertainment
United Arab Emirates -  February 27, 2021:   Tadej Pogacar defends leader’s jersey and extends his overall lead on the General Classification standings to 46 seconds after finishing second in Stage 5 of the UAE Tour atop Jebel Jais mountain.
All eyes were on the Slovenian as he was pipped to the Stage win by surprise winner Jonas Vingegaard (Jumbo-Visma).
The 170km stage saw the peloton start in Fujairah and finish on the second and final summit of the Tour at Jebel Jais. The wide roads saw a lot of Pogacar’s main GC rivals bunched together until around 4km to go.
Alexey Lutsenko (Astana) put up a brave fight and was the protagonist of the day’s main breakaway and managed to hold on until around 3km to go. The race then sprung into action with Vincenzo Nibali (Trek-Segafredo) and Joao Almeida (Deceuininck-QuickStep) ramping up the speed.
Lutsenko was caught by eventual winner Vingegaard inside the final 400m with Pogacar and Adam Yates (Ineos Grenadiers) just behind.
Pogacar looked strong in the final meters and outsprinted GC rival Adam Yates to take second place, keeping the red leader’s jersey heading into the final stages.
Pogacar said: “Today, I was focusing more on the GC guys. In the end there was a lot of headwind in the final climb so it was hard to follow all the attacks. I focused on the most important thing and that was to defend the leader’s jersey. It was a great ride by Vingegaard. I am happy with the second place.
“There was too much headwind to make a difference between Yates and myself, in the end it came down to a sprint. Now, we still have two more stages, nothing is finished until we cross the last finish line so we need to concentrate and stay focused on the next two stages.
“Tomorrow we will be riding in Dubai, it’s a special place and I am looking forward to it. The UAE fans are great and I enjoy riding here.”
The UAE Tour continues into the weekend with the 165km sixth stage coming to Dubai starting from Deira Island and finishing on the Palm tomorrow. The flat course will be another opportunity for the peloton’s fast men so keep an eye out for UAE Team Emirates’ sprinter, Fernando Gaviria.
Stage 5 Results
1. Jonas Vingegaard (Jumbo-Visma) 4:19:08
2. Tadej Pogacar (UAE Team Emirates) 00:03”
3. Adam Yates (Ineos Grenadiers) 00:03”
General Classification after Stage 5
1. Tadej Pogacar (UAE Team Emirates) 17:09:26
2. Adam Yates (Ineos Grenadiers) 00:45”
3. Joao Almeida (Deceuninck-QuickStep) 01:12
Please see more photos here