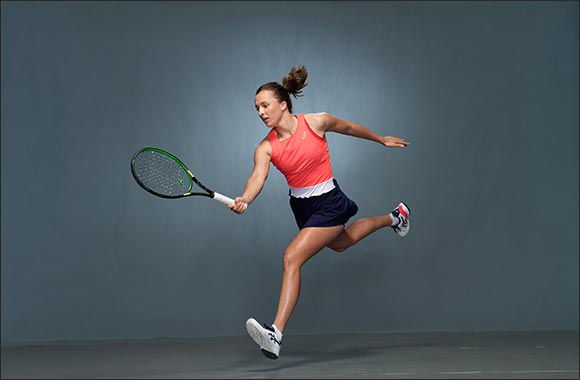 United Arab Emirates -  March 02, 2021:    Iga Swiatek stunned the tennis world in October when she swept to the French Open title in record-breaking fashion to announce her arrival as a major new star.  And she will be hoping to stage a similar run to the title when she makes her debut at the Dubai Duty Free Tennis Championships next week.

The 19 year-old overcame 2020 Australian Open winner Sofia Kenin in the final to become the first player, male or female, from Poland to win a major championship. But it was not only that which guaranteed her a place in the history books. Defeating reigning Dubai champion and world number two Simona Halep along the way, she became only the second unseeded player ever to win the title at Roland Garros.

'We are thrilled to welcome Iga Swiatek to Dubai for the first time,' said Colm McLoughlin, Executive Vice Chairman and CEO of Dubai Duty Free. 'She is one of the most exciting young players to emerge in recent times, and the manner in which she achieved her victory in Paris was remarkable. We look forward to seeing if she can repeat that success here in Dubai.'

Swiatek dropped just 28 games during the two weeks, tying Chris Evert in 1979 for the second-lowest number of games lost on the way to the title, with only Steffi Graf conceding fewer. She was the first player to not lose a set en route to the title since Justine Henin in 2007, she became the youngest French Open champion since Monica Seles in 1992 and the first teenager since Iva Majoli in 1997 to claim the crown.

What made her triumph all the more remarkable was that it was also her maiden title, but close observers of the game might have spotted that she was a star in the making as long ago as 2015. Inheriting sporting genes from her father, an Olympic rower, she excelled on the ITF junior circuit, winning all seven of the finals she competed in.

In 2016 she played a major role as Poland defeated the United States in the Junior Fed Cup to become the best 16-and-under girls’ team in the world, in 2017 she was a finalist in the Australian Open junior doubles event and in 2018, shortly after lifting the French Open junior doubles trophy, she claimed the Wimbledon junior singles title. She also won a gold medal for winning the doubles at the Youth Olympic Games in Buenos Aires the same year.
Despite all that success, Swiatek still questioned her ability, saying, 'Even though I knew I have potential and I knew that I can win big tournaments because I won junior Wimbledon, I still had my doubts. I think I knew in the back of my head that I can do pretty nice things on court, but also it's hard for me to be confident all the time.'

And so, as she made the often difficult transition from the juniors to the WTA Tour, to help overcome those doubts Swiatek engaged the help of sports psychologist Daria Abramowicz.

'I just believe that mental toughness is probably the most important thing in tennis right now because everybody can play on the highest level,' said Swiatek. 'She just made me smarter. I know more about sports and I know more about psychology and I can understand my own feelings and I can say them out loud. She just understands me very well and can kind of read my mind, which is weird. She just makes my confidence level higher.'
Tennis fans have liked what they have seen and in WTA ballots voted her as striking their Favourite Shot of the Year in 2019 and as their Favourite Singles Player of the Year in 2020. She was also the recipient of the 2020 WTA Most Improved Player Award.

'Iga Swiatek captured the attention of the world when she won the French Open, and there is no doubt that she will be one of the leading contenders for the Dubai Duty Free Tennis Championships title,' said Tournament Director Salah Tahlak. 'She is clearly in form this season, taking our defending champion Simona Halep to 6-4 in the third set before conceding their fourth round battle at the Australian Open, and last week overcoming our 2019 champion, Belinda Bencic, in the final of the Adelaide International to claim her second career title.'

Among those who will also be challenging for the title are not only Halep but former Dubai winners Petra Kvitova, Elina Svitolina and Belinda Bencic, 2020 US Open runner-up Victoria Azarenka, recent Abu Dhabi winner Aryna Sabalenka, former Wimbledon and French Open champion Garbine Muguruza and Tunisian sensation Ons Jabeur.

The 21st staging of the WTA 1000 event takes place from 7th to 13th March and is followed by the 29th star-studded ATP tournament from 14th to 20th March.
The Dubai Duty Free Tennis Championships is owned and organised by Dubai Duty Free and held under the patronage of H. H. Sheikh Mohammed bin Rashid Al Maktoum, Vice-President and Prime Minister of the UAE and Ruler of Dubai.