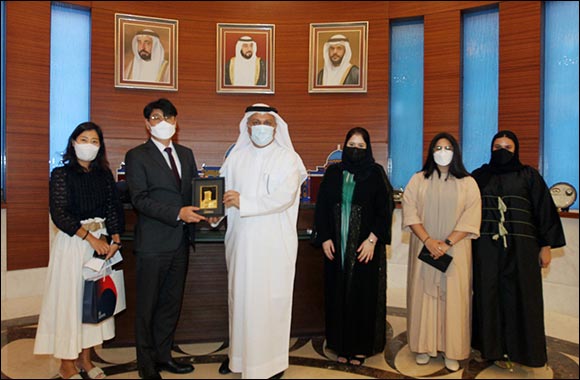 Sharjah, July 25, 2021:  The Sharjah Chamber of Commerce & Industry (SCCI) discussed with the Consulate General of the Republic of South Korea in Dubai and the Northern Emirates means of enhancing economic cooperation and commercial relations between companies and investment institutions operating in Sharjah and South Korea, supporting partnerships between the two sides in various sectors and economic fields, and investment opportunities available in Information technology, healthcare, tourism, and culture.

This came during a visit of HE Moon Byung-Jun, Consul General of the Republic of Korea in Dubai to the SCCI headquarters, where he was received by HE Mohammed Ahmed Amin Al-Awadi, Director-General, SCCI, and Fatima Khalifa Al Mokarrab, Director of International Relations Department, SCCI.
While welcoming the visiting delegation, Mohammed Ahmed Amin Al-Awadi underlined the depth of UAE-South Korea relations, where the latter is considered one of the most important trading partners for the UAE and the Emirate of Sharjah in particular.

The SCCI Director-General highlighted the services provided by the Sharjah Chamber to businessmen and investors, hoping that this visit would advance the economic and investment cooperation relations between the two friendly countries.

He stressed that the Chamber is keen to attract investments, build commercial partnerships, and promote the rewarding opportunities available in various economic sectors in the Emirate of Sharjah. It also provides enormous incentives and benefits to attract businessmen from worldwide so as to maintain the pioneering position of the emirate as a prominent economic hub both regionally and globally.

For his part, Moon Byung-Jun thanked the Chamber for the warm reception and the keenness it showed to provide means of support, cooperation and coordination with the Korean business community. He also lauded renaissance and economic development witnessed by the Emirate of Sharjah in various fields, expressing his eagerness to extend the existing cooperation with the Chamber to enhance mutual trade and investment relations.

The South Korean Consul General pointed to the importance of South Korean companies participating in the exhibitions hosted by the Expo Centre Sharjah, such as the SteelFab, the Watch & Jewellery Middle East Show (WJMES), and other cultural events hosted by Sharjah which is considered a regional leader in this field.

Dubai Health Authority: Medical Training For Interns Can Be Across Private Or Go ...

Maserati Celebrates The Opening Of Its New Store In Milan

Redefining The Household Routine With LG