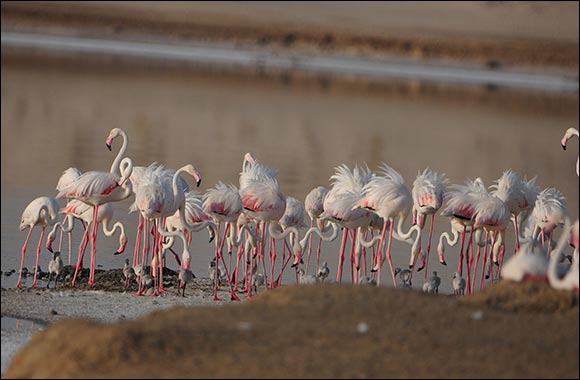 The launch was held at a global webinar, organised by the Wetlands International in partnership with EAD. The Agency provided financial support for the development of the portal which was launched followed by a panel discussion.

With over 870 waterbird species, the newly launched Waterbird Populations Portal will provide the latest population size estimates and trends of over 2,500 populations. These range from the beautiful Greater Flamingos, which are regularly seen in the coastal and inland wetlands of the UAE, and the majestic Sarus Crane that stands at over 1.5m tall, making it the tallest flying bird inhabiting wetlands and rice fields in South East Asia and Australia. It also includes other waterbirds species from Sandpipers to Plovers, including the unique Crab Plover, which is currently breeding on two of Abu Dhabi’s offshore islands. Conservation of all these species requires easily accessible information on their status and trends to help governments and people take action.

“The new portal makes access of key waterbird information much easier for management authorities, such as EAD, and will certainly help us to prioritise sites for consideration as new Ramsar Sites,” stated HE Dr. Shaikha Salem Al Dhaheri, the Secretary General of EAD.

“I am pleased that the support we provided is going to be extremely useful for users, ranging from governments to scientists and conservationists, in the UAE and across the globe. We are honoured to have contributed to such an important initiative led by the Wetlands International.” added HE Dr. Al Dhaheri.

Commenting on the occasion, Mr. Ahmed Al Hashmi, Acting Executive Director, Terrestrial & Marine Biodiversity Sector of EAD, who also participated in the launch said: ‘‘The development of the interactive portal by Wetlands International is an important achievement, and timely support provided by the Agency has led to the development of this tool which will act as a support system for waterbirds and wetlands worldwide.”

He further urged governments, NGOs and experts worldwide to provide their feedback to confirm how the Portal practically supports their work and suggestions for improvements in the future.

While speaking as a panellist, Dr. Salim Javed, Acting Director of Terrestrial Biodiversity Division at EAD said: ‘‘Access to the latest information on population size and trends is critically important for government agencies responsible for the management of wetlands and waterbirds.”

He added: ‘‘Interactive maps and the latest 1% threshold of each population will allow us to identify and prioritise sites for local level planning and inclusion within protected area networks, as well as declaration of sites as wetlands of international importance under the Ramsar Convention.”

‘‘Our Agency has undertaken assessment and monitoring of breeding and migratory waterbirds in Abu Dhabi. Additionally, through extensive satellite telemetry studies on key migratory waterbirds, we have gained critical insights into migratory connectivity and use of wetlands along the flyways, which has helped us in protecting important sites,’’ he added.

EAD also coordinates the International Waterbird Census (IWC) in the UAE, a long-standing citizen science initiative which allows volunteers to visit important wetlands across the UAE and collect data on waterbirds. Information from a dedicated group of volunteers allows collection of useful data on waterbirds, which feeds into the estimation of waterbird populations,’’ elaborated Dr. Javed.

Dr. Javed concluded: “As many wetlands across the globe are under threat from development, climate change and invasive species, we need to collectively work on their protection. As wetlands are among the most productive ecosystems in the world, we also need to restore some of the degraded wetlands which are in critical need of restoration.’’ Dr. Javed alluded to the fact that the UN has recently declared the decade as ‘UN Decade on Ecosystem Restoration’ to reverse and restore degraded ecosystems.

The WPP provides links to 160 threatened waterbird species, as per the IUCN Red List of Threatened Species. The WPP will support the development and actions of the Ramsar Convention, on the Convention on Migratory Species, and the Convention on Biological Diversity, as well as major regional/flyway initiatives.

The new and improved open access, WPP, features an interactive interface, and easier access to key information on waterbird populations, trends and 1% thresholds. An added feature will also provide population level boundary maps for the world’s waterbird species. This can be used by national or local wetland authorities or site managers, to access a shortlist of relevant population with their 1% population thresholds, to check against available information and identify potentially internationally or nationally important wetlands. This will help prioritisation of sites for legal designation or protection.

Increasing the number and area of these internationally important sites will also help governments meet their targets under the Convention on Biological Diversity, to enhance the coverage of protected areas. Besides formal designations, the portal offers opportunities to support the identification of important bird areas and key biodiversity areas worldwide.

The new portal replaces the Waterbird Population Estimates Portal that was launched at the Ramsar Conference in 2012 and was intensively used by governments, NGOs, researchers, and others from around the world over the last decade.

Waterbirds worldwide are trying to adapt to the ongoing changes in climate as well as transformations to landscapes and habitats driven by human development. To continue to support the data users, information on the Portal will need to be updated on a regular basis to reflect the latest knowledge on the status and trends of populations.