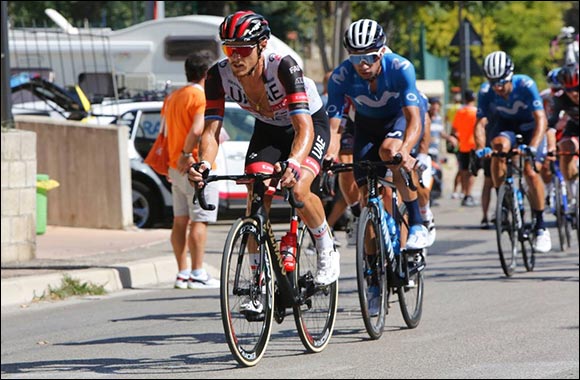 Share Home >> Entertainment
News | Eschborn-Frankfurt 'Rund um den Finanzplatz'| Trofeo Matteotti – Monday, 20, September, 2021
Matteo Trentin couldn’t have asked for a better preparation for the World Championship road race, with the former European Champion claiming victory at the Trofeo Matteotti in Italy .
The UAE Team Emirates rider won ahead of Jhonatan Restrepo (Androni Giocattoli-Sidermec) and Valentin Ferron (Total Energies) in the same race he also won in 2019.
The main action of the race came after 60 km, when a group of twelve escaped. Among those riders were Matteo Trentin and his teammate Alessandro Covi, with Trentin attacking again 50 km from the finish, followed by six riders.
Trentin hit-out again 10 km from home, creating a gap of +21 “on the first group of chasers and holding off to the line.
The triumph marks the 29th win of the season for UAE Team Emirates and the first victory for Matteo Trentin for the squad.
Trentin: “The race was very tough all day. I wanted to attack on the last lap on the long climb, but Ferron made the first move, so I joined him and then we pulled together. On the last stretch, I attacked again and, when at – 5km I noticed that Ferron was on the limit and Restrepo was coming back to us from behind, I put in one final dig that brought me to the finish.
I’m really happy, it was about time that I won a race again.”
Trofeo Matteotti Results
1. Matteo Trentin (UAE Team Emirates) 4h40’15 “
2. Jhonatan Restrepo (Androni Giocattoli-Sidermec) +21 ”
3. Valentin Ferron (Total Energies) s.t.
Meanwhile in Germany, Alexander Kristoff continued his good spell of form with a third place podium at the World Tour appointment at Eschborn-Frankfurt.
The 187 km classic which the Norwegian had won on four previous occasions, was decided in a sprint finish won by Jasper Philipsen (Alpecin-Fenix), after the bunch absorbed the 15 rider breakaway inside 30km from the line. John Degenkolb (Lotto Soudal) stood on the second step with Kristoff in third.
The Norwegian will now turn his attention to the World Championships road race which take place on Sunday in Flanders,Belgium.
Eschborn-Frankfurt Results
1.Jasper Philipsen (Alpecin-Fenix) 4:28:03
2.John Degenkolb (Lotto Soudal) s.t
3.Alexander Kristoff (UAE Team Emirates) s.t