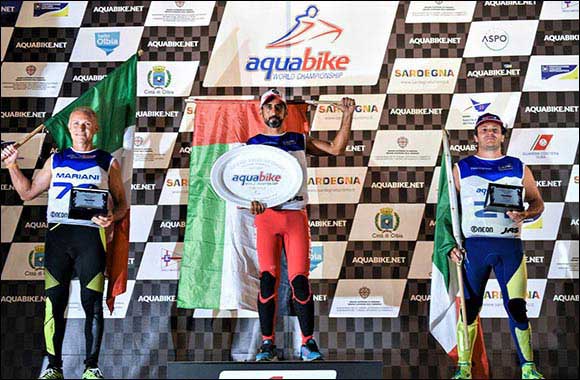 22, September, 2021: The UAE’s Rashid Al Mulla is firmly on course for a fourth successive world aquabikes crown after recording a comprehensive overall victory at the Regione Sardegna Grand Prix of Italy.

Team Abu Dhabi’s reigning world freestyle champion was in a class of his own as he completed back-to-back moto victories in the opening round of this year’s UIM-ABP Aquabike Class Pro World Championship in Olbia.

He will now take a record of 12 consecutive Grand Prix victories and 26 moto wins into November’s second round of the championship in Kuwait, with the season reaching its climax in Sharjah in December.

“The whole grand prix weekend in Olbia was amazing,” said Al Mulla. “We tuned the ski perfectly and it was flying. It was great to raise the UAE flag as the No.1 again.”

The Emirati again had too many tricks in his repertoire to be troubled by his biggest rival,
Italy’s reigning European champion Roberto Mariani, who once more had to settle for second best.

Al Mulla’s Abu Dhabi team-mate, Emma-Nellie Ortendahl, needed treatment for an injured elbow after the three-times Ski Ladies GP1 champion battled to a brave third place overall in Olbia.
Ortendahl had looked to be heading for victory in the third moto when she was thrown into the water after a collision with Estonian rider Jasmiin Ypraus.

Frenchman Jeremy Perez cruised to victory in the second moto to clinch overall success in Runabout GP1 as Kuwait’s defending world champion Yousef Al Abdulrazzak suffered a blow to his title hopes when forced to retire with technical problems.

Three-times world champion Kevin Reiterer served up another master class in Ski GP1, powering his way to victory in the final moto after dominating the previous two from pole position.