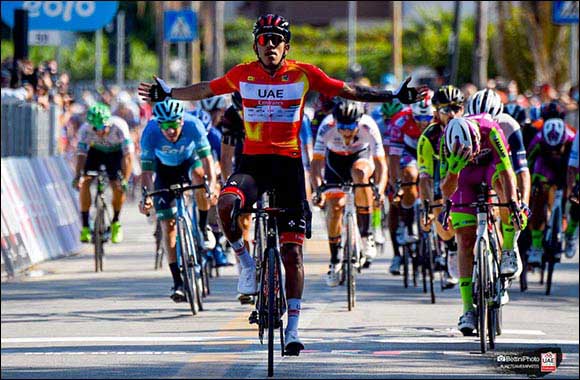 Share Home >> Entertainment
September 30, 2021:  The UAE Team Emirates’ sprint train proved itself once again on day two of the Tour of Sicily, as it delivered Sebastian Molano to the line for his second consecutive victory in the 173km race from Selinute to Mondello.
The Colombian conquered the 2nd stage, preceding Filippo Fiorelli (Bardiani-CSF), who was later relegated to the bottom of the group due to sprinting irregularities, Matteo Moschetti (Trek-Segafredo) and Jakub Mareczko (Zabù Wines).
Molano’s victory came off the back of another superb team effort. UAE Team Emirates controlled the race without any problems; Christian Munoz catching the six man break with 20 kms to go, before leading the group towards the final sprint. Alessandro Covi, David De La Cruz and Brandon McNulty worked tirelessly to keep bunch riding at a rapid pace and prevent further attacks in the run to the line. Once again Maximiliano Richeze showed why he is one of the best lead-out men in the peloton helping position Molano perfectly before his Columbian team mate opened up the sprint and demonstrated his superior speed.
Molano: “Today the team’s work was spectacular, we controlled the race by maintaining a constant pace which suited me well. Munoz worked hard to bring back the break, then De La Cruz, McNulty and Covi came into action to take me to the sprint. Richeze delivered me in the sprint flawlessly and I was able to take a beautiful victory.
Today we were really perfect ”.
Molano retains the leader’s jersey for the 3rd stage, starting from Termini Imerese and arriving in Caronia after a 180km route that includes the ascent of Pollina (11.4 km at 5.6%) and the final stretch into Caronia (3.6 km to 5.7%).
Stage 2 results
1. Sebastian Molano (UAE Team Emirates) 4h25’41 “
2. Matteo Moschetti (Trek-Segafredo) s.t.
3. Jakub Mareczko (Wines Zabù) s.t.
General classification after the 2nd stage
1. Sebastian Molano (UAE Team Emirates) 9h02’42 “
2. Filippo Fiorelli (Bardiani-CSF) +14 ”
3. Vincenzo Albanese (Eolo-Kometa) s.t.