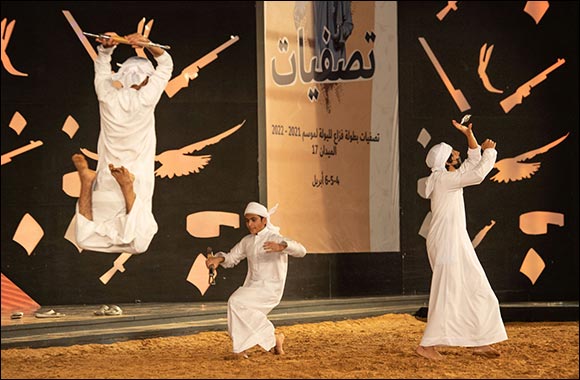 Share Home >> Entertainment
The final phase of the Fazza Championship for Youlah Qualifications will take place on 7, 8, 9 October
Dubai, 6 October 2021: The final phase of the qualifications rounds for the 22nd edition of the Fazza Championship for Youlah, and the 17th edition of Al Meydan program, will be held on 7, 8 and 9 October, from 6pm onwards, at Al Meydan Fort in Dubai’s Global Village, the Hamdan Bin Mohammed Heritage Center (HHC) has announced on Tuesday.
Youlah is a UAE heritage sport, which is a traditional performance involving the use of a rifle as a prop, and an integral part of Emirati culture. The competition is just one of the many initiatives undertaken by the HHC to preserve the country’s intangible cultural heritage for future generations to cherish.
Rashid Al Khasouni, HHC Director of Championships, said: “New Yuweels (Youlah performers) are to be ready for the battle against former championship titleholders.
“We are pleased to see a rising demand by a large number of Emirati youth, who are eager to take the challenge. This comes after the changes introduced last year in the competition. Since we have added five new competitions beside the actual Youlah performance, in order to immerse the contestants in other cultural activities, such as camel and horse riding, plus a number of other cultural activities,” he added.
“There was a large number of Emirati youth who took part in the first phase. Nonetheless, we need to pave the way for other participants to take their chances, until we finalise the shortlisting process. Despite witnessing the proficient skills of so many Yuweels, we still have to shortlist the best 16 contestants for the championship,” Al Khasouni continued.
This weekend, Al Meydan Fort at Dubai’s Global Village, will yet again, see hundreds of Emirati youth challenging one another, in Youlah performance, to qualify for one of the most popular Emirati heritage competitions in the region - the Fazza Championship for Youlah.