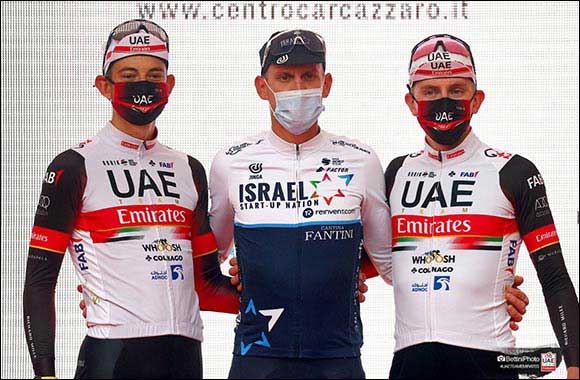 2nd and 3rd for Emirati riders in Italy

October 07, 2021:  UAE Team Emirates were active from the start on the hundredth edition of the Tre Valli Varesine (1.Pro) which saw the riders face 196.7km from Bursto Arsizio to Varese.

As the riders entered the second hour of racing, Pogačar immediately launched the attack together with Tim Wellens (Lotto Soudal), recovering the small gap from the fleeing group and taking the lead in the race.
Shortly after it was the turn of Formolo who, together with four other riders, joined his Slovenian teammate forming the new group leading the race for the last 90km.

In the race characterised by rain, bad luck struck for the Emirati team, with Pogačar slowed down by a puncture in an important phase of the race.

The Slovenian, who returned to the group of pursuers, then put himself at the service of Formolo going, together with Marc Hirschi, to control and manage the gap of the group without allowing accelerations that could mend the gap created with the leaders.

The Italian kept in touch with Alessandro De Marchi (Israel Start-Up Nation) going for the victory with the latter in the final 10km.

Neither of them got the better of the other until the final sprint where De Marchi was able to cross the finish line first.

Behind them came the chasing group with Pogačar taking third place and Alessandro Covi finishing his race in ninth position.

Davide Formolo: “Today was a really hard and very long race. I tried several times to break away and raced each lap as if it were the last, giving my all. In the end, everything was decided in a two-man sprint but I had nothing more in the legs to give ”.

Tadej Pogačar: “We knew it would be a tough race and we immediately tried to be protagonists and get in the moves. I attacked early and together with Davide we worked well together. After the unfortunate puncture I managed to get into the group of pursuers and so we started protecting Formolo who was in the lead. In the end we took home a second and third place so we can be satisfied ”.

UAE Team Emirates will again feature in Italy with the Milano-Torino scheduled for tomorrow, Gran Piemonte on Thursday and Il Lombardia on Saturday that will see Pogačar face the Classic Monument for the first time and bring the curtain down on his most memorable season.