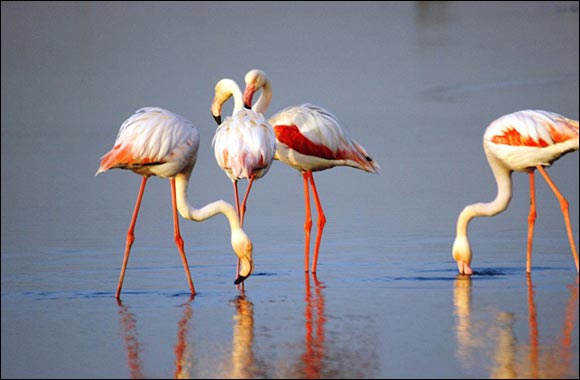 Dubai, 07 October 2021:   Dubai Municipality will celebrate the World Migratory Birds Day, which falls on 9th October. Observing this international occasion is part of strengthening the Municipality’s leading role in raising environmental awareness for the emirate's community and its quest to preserve biodiversity and ecosystems in the emirate.

Environment Department of Dubai Municipality will organize various awareness programs in an interesting and attractive way for all segments of society with the aim of educating them about the importance of migratory birds and their different types, the threats they face and how the community can contribute to mitigating them.

This year's global event, with the theme, “Sing, Fly, Soar, like a Bird,” focuses on the phenomena of the birds' voices and flight as a way to inspire and connect people of all ages in their shared desire to celebrate migratory birds and unite in a joint global effort to protect birds and the habitats they need to survive.

World Migratory Bird Day has a global reach and is an effective tool for sharing best practices in contributing to the protection of migratory birds from the threats they face on their journey in search of food, temperate climate or escape from predators.

The Environment Department is organizing various environmental events on Saturday, 9th October 2021, at Creek Park - Gate No. 1, from 4 pm to 6 pm. This occasion is an opportunity for all family members to participate in environmental workshops that will be presented in cooperation with various private companies.

The workshops include environmental messages related to migratory birds and how to preserve them. One of the most prominent educational workshops offered by the Environment Department is how to make bird nests that the participants will be able to place in their homes to attract birds, specifically migratory birds, that they will take as a resting place before completing their journey. The public can enjoy unique experiences, including getting to know some of the birds that will be present at the event site, such as falcons. Visitors can take photos with them, with the need to adhere to all precautions during their visit to the event.

One of the most prominent projects that will be presented to the public is the program for tracking migratory birds by satellite, where a tracking device will be installed, equipped with a satellite positioning device, to follow the movement of the bird without the need to catch it again and study its migration path, which contributes to programs for the protection and proper management of these birds. In addition, everyone will be able to participate in the various environmental competitions that will be organized and an environmental Yoga workshop in which participants will be able to enjoy the birds singing while exercising. Art enthusiasts will be able to showcase their creativity by coloring a 15-meter long environmental painting of migratory birds, and watch the environmental art exhibition in which 15 artists of different nationalities will participate to embody the importance of birds through their paintings.

Bird migration is a natural miracle. Migratory birds fly hundreds and thousands of kilometers to find the best environmental conditions and habitats for feeding, breeding and raising their young. When conditions at breeding sites become unfavorable, it is time to travel to areas where conditions are better.

The Emirate of Dubai and the UAE in general represent a major habitat for many migratory birds due to the availability of a safe haven for these birds during their migration. The country also represents one of the favorite resting places for many migratory birds due to the abundance of food sources and the availability of natural reserves within the country. The coastal shallow waters, inland waterways, mangroves and salt marshes are among the main important elements for birds escaping from the frozen icy areas in the Asian and Siberian poles during their quest for a warmer climate in Africa.

The UAE hosts annually large numbers of migratory birds, due to its location and the nature of its climate, in addition to the availability of suitable havens for birds, where two important paths of bird migration overlap, the path of bird migration from East Africa to West Asia, and the path of Central Asia, while birds of northern Europe and Asia visit the UAE as a breeding area to avoid harsh climatic conditions due to the extreme cold in the northern breeding areas which are associated with lack of food supply.

Reserves distributed in various regions of the Emirate of Dubai constitute important habitats for hundreds of species of migratory birds annually, such as Socotra cormorants, sooty gulls, white-cheeked terns, crested cats, black grouse, and yellow-necked sparrows, in addition to wading birds and birds of prey, such as the osprey and the peregrine falcon and small birds, in addition to types of storks, such as the beak, heron, and flamingo that are found in coastal areas and swamps, as well as different types of ducks.

Reserves provide safe havens that reduce the pressures on migratory birds and provide them with maximum protection in order to preserve biodiversity and enhance environmental sustainability. There are eight nature reserves in the Emirate of Dubai as protected areas to preserve wildlife within the emirate, covering approximately 1,297,82 square kilometers and representing various ecosystems - desert, marine, coastal and mountainous habitats, which are teeming with many types of plants, animals, fish and birds. Ras Al Khor Wildlife Sanctuary is also one of those key areas that provide a safe place for migratory birds and are of international ecological importance due to their unique biodiversity.

Ras Al Khor Wildlife Sanctuary was established in 1985 and declared by Local Order No. 2 of 1998 as a protected area. In December 2003, His Highness the Ruler of Dubai issued Law No. 11 of 2003 to define the regulations related to nature reserves. Ras Al Khor Wildlife Sanctuary was added to the list of wetlands of international importance under the Ramsar Convention in 2007, thus becoming the first nature reserve in the UAE to be recognized globally according to the Convention. It is also an important destination for birds for breeding and migration according to the Birdlife International.

The most beautiful thing that can be seen in Ras Al Khor Wildlife Sanctuary is the flamingo birds, especially when these migratory birds come to spend the period between autumn and spring, where many of these birds can be seen, and even when most of them return to Central Asia to spend the summer months. A group of them remain here to inhabit this area throughout the year.

Ras Al Khor Wildlife Sanctuary is characterized by mangroves, which play a major role in the UAE ecosystem and are home to many living creatures and many resident and migratory birds. A large variety of organisms live and reproduce within the mangrove ecosystem. Therefore, the preservation and growth of mangroves is necessary to preserve these living creatures, especially the resident and migratory birds, because they provide a safe haven for life and reproduction in which food sources are available from small fish and mollusks.

The Ras Al Khor Wildlife Sanctuary in Dubai annually hosts thousands of migratory birds that reside temporarily on the banks of salt flats, mud flats, mangroves and swamps that are widespread there. The reserve includes hundreds of species of birds, and is characterized by the richness and diversity of plant and fungal life, especially seabirds of various types and shapes, including flamingoes, which migrate to the UAE with the onset of winter and abound in January, preferring shallow waters.

The Al Marmoom Conservation Reserve also receives many migratory birds, with an area of more than 40 hectares of virgin shrubs. The reserve includes 204 species of local birds and 158 species of migratory birds. The Marmoom Reserve is considered the first unenclosed desert reserve in the country open to the public that combines the concepts of eco-tourism and nature protection and it has the highest concentration of big Alventer flamingoes in a desert area with a population of 500-2000 birds. The reserve has eight bird watching towers distributed in its lake areas, which include thousands of migratory and local birds for bird lovers and enthusiasts for watching. A bird watching platform is also built in the form of interlocking straps.