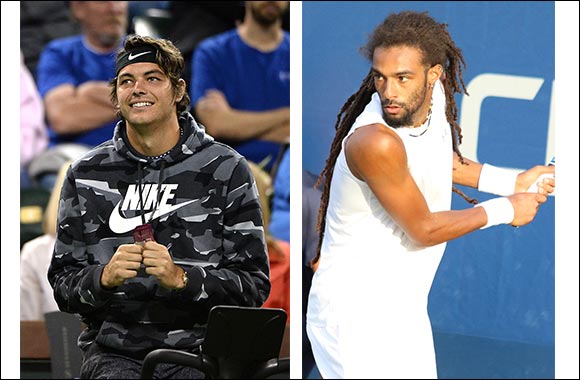 Share Home >> Entertainment
• Taylor Fritz, youngest American in Top 25 since Roddick
• Dustin “Dreddy” Brown – fan favourite and leader against Rafa Nadal in head-to-heads
October 13, 2021:  US singles ace, Taylor Fritz, and German crowd favourite, Dustin Brown, are the latest players to be announced for the Tie Break Tens Dubai Presented by Zone (TB10s) tennis tournament. The first time this exciting new tennis concept has visited the Middle East, the tournament will take place on Friday 22nd October at the Coca-Cola Arena in City Walk.
Fritz and Brown join French ace, Gaël Monfils, and British number 1, Dan Evans, in the line-up, with further big names set to be confirmed shortly.
At only 23, Taylor Fritz has already enjoyed an impressive career. In 2019, aged 21, he became the youngest American in the World’s Top 25 since Andy Roddick in 2004; in the same year, he won the Eastbourne International on grass in straight sets against Sam Querrey. In 2021, he became the top-ranked American men’s player in the ATP rankings list.
The son of two former professional tennis players, Fritz turned pro in 2015 after winning the Junior US Open. He plays an aggressive baseline game with a formidable serve. He also adds sharp cross-court shots – on the back and forehand – that his competitors find hard to return. This playing style promises to produce some exciting tennis in the TB10s format, which he played in Indian Wells in 2019.
Dustin Brown, nicknamed ‘Dreddy’ because of his dreadlocks, is a great favourite with crowds for his entertaining style of play and frequent use of trick shots. He is also one of only two players who can claim a 100 percent win record against Rafael Nadal – he won against the formidable Nadal in the 2014 Halle Open and again at Wimbledon in 2015. Dustin plays both singles and doubles, and has won 24 titles overall in his career.
ZONE.game, creator of the revolutionary gaming platform, ZONE Play, and lead sponsor of the Tie Break Tens Dubai tennis tournament, has announced an exciting addition to an event already packed with extraordinary matchups.
Gael Monfils and Taylor Fritz will challenge esports FIFA Champion, Musaed Al-Dossary, in an epic battle on the ZONE Play platform.
Al-Dossary is a globally recognised professional FIFA player, and winner of the world championship in 2018, the Xbox world championship in 2019, and was elected Esports player of the year in 2018.
A challenge at the top, bringing together the worlds of esports and sports “in the Zone”. The winner of the friendly match will be awarded one of Zone’s rare AFK Elephants NFT, valued at USD 25,000.
“We’re really excited to have these great new additions to the two fantastic players already signed up for TBT10s Dubai.  As Zone, we are dedicated to bring to our community the most exclusive challenges. We are looking forward to the match ups between Monfils, Fritz and Al-Dossary, which we believe will produce a fierce competition, as these highly skilled and competitive professionals from the sports world share a strong passion to gaming alongside Tennis,” said Adi K Mishra, Founder and CEO of Zone, lead sponsor of the Tie Break Tens Dubai.
Tickets for the Tie Break Tens Dubai event are available on the Coca-Cola Arena website and across all ticketing outlets in the UAE: 800tickets, Platinumlist, Book My Show and Virgin Megastore. There are four categories, starting at AED 150, increasing up to an exclusive floor seating option with a hospitality package at AED 850 that includes three drinks.