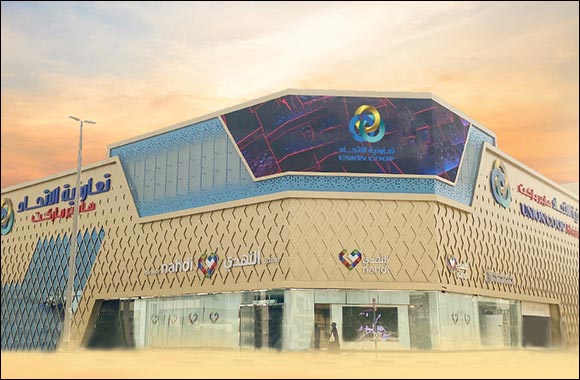 Dubai, UAE - October 18, 2021:  Retail Pioneer, Union Coop revealed that the total donation made by the employees to support and help their colleagues who have gone through unfortunate circumstances is approximately One Million three hundred forty-four thousand Dirhams. The figure revealed was since the launch of the Humanitarian Support Program in the year 2018, through the Department of Human Resources and Emiratization.

In detail, Mr. AHMAD BIN KENAID AL FALASI, Human Resources & Emiratization Director, Union Coop said that Union Coop is moving forward towards the sustainability and continuity of its work and its humanitarian and community initiatives at the level of its departments and branches spread in the Emirate of Dubai and at the local level, through which it aims to empower its employees and provide support and assistance to those who are going through difficult circumstances, to achieve the highest levels of support and assistance for them and their families, and to enhance institutional loyalty and apply it on the ground and instil the concept of cooperation and teamwork.

He pointed out that the Humanitarian Support Program was launched in 2018, with an aim to effectively generate contributions that help meet the critical requirements of employees in challenging situations, through monthly donations provided by Union Coop employees to the program, each according to their financial ability and desire, to enhance and establish the value of humanity among employees, noting that the number of employees benefited from the program since the beginning of the year 2021 until the end of September reached 80 employees.

He added that the concept of humanitarian work, community initiatives and employee support has become an integral part of the Union Coop initiatives and its various activities, as it is working continuously through the Employee Happiness Unit to build an advanced and integrated work environment and system that enhances institutional loyalty, noting that the fundraising initiative is one of the creative initiatives that assist members of the Union Coop family and allow them to help each other, which develops their sense of social responsibility, explaining that ‘contribution’ is a noble and beloved act among community members.

He pointed out that Union Coop has set several conditions and controls for the program so that employees who may go through emergency or exceptional circumstances can benefit from it, but at the same time it deals with all cases received confidentially and flexibly through excepting some of the controls and requirements necessary to obtain aid, and provides assistance and responds to applicants as soon as possible to avoid causing them embarrassment and contributing to the dissemination of the desired benefit from the program, so that the largest possible segment of employees can benefit from the aid.

He pointed out that the Humanitarian Support Program would not have succeeded and achieved its goals without employees' engagement and their support for the program since its inception. He thanked every employee who contributes to the success of humanitarian and community programs and initiatives in Union Coop to ensure its continuity and achieve its results to serve the various segments, whether they are employees, institutions or others, pointing out that Union Coop always seeks to expand its services to include the largest possible number of people to benefit everyone.