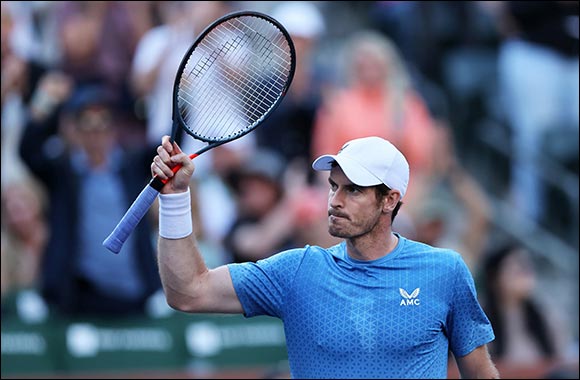 Share Home >> Entertainment
• Intriguing line-up of matches for three-day festival unveiled
• Debutants Casper Ruud and Denis Shapovalov to open Championship, followed by Murray against Dominic Thiem on 16 December
• US Open champion and Olympic gold medal winner Belinda Bencic also go head-to-head on Day 1
• Top seeds Rafael Nadal and Andrey Rublev enter Championship on 17 December
• Soak up festival atmosphere over three days and enjoy exciting activations in Tennis Village
• Tickets available at www.ticketmaster.ae and Virgin Megastores across the UAE
Tuesday, 23 November 2021, Abu Dhabi, UAE: Abu Dhabi is ready to make way for the best in tennis after two-time champion Andy Murray was confirmed as the eighth and final star player for the 13th Mubadala World Tennis Championship alongside the draw for the Championship, which returns this year from 16 – 18 December at the International Tennis Centre at Zayed Sports City.
The signing of crowd favourite Murray, a three-time Grand Slam champion and double Olympic singles gold medallist, completes a stellar eight-player line-up for the return of the Championship, twelve years on from his victory in the inaugural edition.
Murray, MWTC champion in 2009 and 2015, joins a field featuring three of the world’s top 10 male players: Andrey Rublev (No.5); Rafael Nadal (No.6); and Scandinavian star Casper Ruud (No.8). With Denis Shapovalov (No.14) and Dominic Thiem (No.15) also lining up, this year’s Championship also boasts five of the world’s top 15.
“I’ve got many happy memories of Abu Dhabi and I’m looking forward to returning.” said Murray.
“With Emma (Raducanu) also playing on day one, we will be flying the flag for British tennis and looking to put on a strong display.”
The stars are set to collide on court as the Mubadala World Tennis Championship makes a welcome return, with full capacity, and the draw has created some intriguing matches.
Ticketholders have netted a treat on Day 1, as Casper Ruud, winner of the most ATP titles in 2021, will take on Wimbledon semi-finalist Denis Shapovalov in the Championship’s opening match on 16 December. That will be followed by Dominic Thiem’s return to competitive tennis when he takes on three-time Grand Slam champion and Abu Dhabi crowd favourite Andy Murray.
A spectacular Day 1 will be closed by the much-anticipated women’s match between US Open champion Emma Raducanu and Tokyo Olympics singles gold medallist Belinda Bencic, a rematch of their US Open quarter-final, which Raducanu won en-route to her fairytale Grand Slam victory in New York.
Day 2, on Friday 17 December, will see World No.6 and defending champion Rafa Nadal and World No.5 Andrey Rublev enter the Championship when they face the winners of the Day 1 men’s matches in the semi-finals, after the fifth-place play-off. Rublev will face the winner of Ruud and Shapovalov, whilst five-time winner Nadal will take on either Thiem or Murray in a blockbuster match. The final day of the three-day festival will see a third-place play-off followed by the final.
The Tennis Village will open each day at 12pm, ensuring ticket holders can make the most of excellent food and beverage offerings, tennis clinics, Q&A sessions with the players and a host of tennis-themed activities and competitions offering great prizes.
“The draw is always a milestone moment, but it feels a bit extra special this year as we look forward to the return of our Championship with full capacity,” said John Lickrish, CEO, Flash Entertainment. “Andy has a special place in Abu Dhabi as the first champion on this tournament back in 2009. With his return completing our line-up, this year’s field is one of the strongest in the Championship’s history with the perfect blend of youth and experience, Abu Dhabi crowd favourites and exciting debutants. It’s shaping up to be a fantastic three-day festival on and off court.”
Tickets, starting from AED 100 for adults and AED 50 for children, are available from ticketmaster.ae and Virgin Megastores across the UAE. In line with current protocols, measures will be in place within the stadium and throughout the Tennis Village to ensure the health and safety of fans, players and officials.
Additionally, in line with the latest government guidelines the Championship will welcome fans and spectators with green status on the Al Hosn app and a negative PCR test result with 96-hour validity across three days of exciting tennis action, in a safe and secure environment.
Premier Hospitality tickets are available, offering fans a premium F&B menu and courtside seating providing prime viewing and an unparalleled experience.
MWTC 2021 ticket prices (AED)