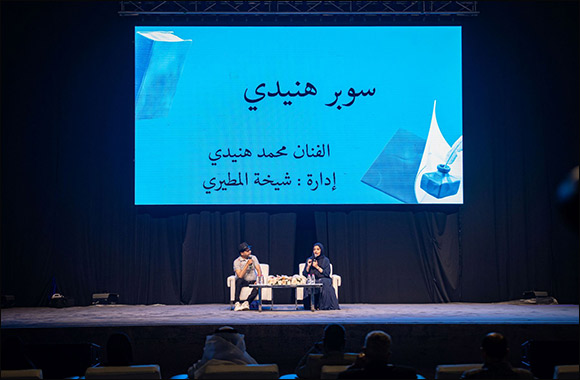 Mohamed Henedy at SCRF 2022: I Owe my Success to Children

Sharjah, May 12, 2022:  Visitors of all ages flocked to see their favourite comedian and voice-over actor, Egypt’s Mohamed Henedy, on the inaugural day of the 13th edition of the Sharjah Children's Reading Festival (SCRF), running in Expo Centre Sharjah with the theme 'Create Creativity'.

In a session titled 'Super Henedy' moderated by author and poet Sheikha Al Mutairi, the Egyptian artist said that fans are an indicator of his work's success. On the importance of laughter, he said: 'Using laughter to bring joy to people's hearts is beautiful.' He noted that creating comedy works directed at children is a very unique and enjoyable experience; however, he added, actors should present content that protects and safeguards their innocence and at the same time put a smile on their faces.

Special care
He pointed out that childhood years require special care, where freedom plays a crucial role in building children's personalities and providing a sound environment that ensures healthy upbringing. He stressed that he respects the younger generations and views them as an indicator of his comedic work's success, even if the content is directed at adults.

Safe comedy
The session progressed to a livelier setting as the Egyptian star listened to children in the audience and interacted with them. Parents attending the session lauded the comedian's work, which they characterised as appealing and safe for their children to watch.
At the end of the session, Henedy said that his body of work, starting from Disney movies voice-over to making his own films and series, is designed to advance children's knowledge and skills. He stressed that his art conveys important messages on values and morals in a fun way.