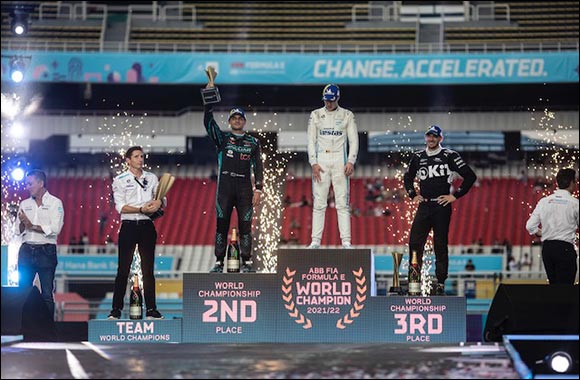 Share Home >> Entertainment
• New Zealander, Mitch Evans is runner-up in season eight of the ABB FIA Formula E Drivers’ World Championship, completing the season with 180 points for Jaguar TCS Racing
• Mitch Evans climbed through the field in the season finale to finish seventh, fighting for the drivers’ world championship until the very last race
• Norman Nato finished fifteenth in the Hana Bank Seoul E-Prix
• Briton, Sam Bird, who was unable to compete in the season finale due to an injury, finished the season thirteenth
• Jaguar TCS Racing finished fourth in the teams’ standings with 231 points – the team’s biggest points haul in Formula E
Dubai, United Arab Emirates, 16 August 2022 – After 15 races in ten cities across four continents, Mitch Evans is runner-up in the 2022 ABB FIA Formula E Drivers’ World Championship for Jaguar TCS Racing. Mitch Evans achieved his best ever season in Formula E with four wins, seven podiums, one pole position, one fastest lap and 180 points.
In the final race of the season, Mitch Evans lined up thirteenth on the grid after a challenging qualifying session where he was unable to progress through to the Duels. With a slim chance of the title still to fight for, the 28-year-old was determined to climb his way through the pack. As Mitch has demonstrated all season, he showcased the race pace of the Jaguar I-TYPE 5 and his talent by carving his way into the points within the first five minutes of the race. A 10-minute safety car halted his progress further and he brought his I-TYPE 5 home in seventh.
Norman Nato, in his debut weekend for Jaguar TCS Racing, lined up sixteenth on the grid after qualifying eighth in Group A. The Frenchman worked his way through the field before dropping back down to finish the race in sixteenth.
Sam Bird finished thirteenth in the overall drivers’ championship after not being able to compete in the final two rounds in Seoul due to an injury. The Seoul E-Prix season finale was the first two races Sam has missed since the inception of Formula E.
At the end of the 100th Formula E race and season eight, Jaguar TCS Racing finish fourth in the teams’ world championship with 231 points – the British team’s biggest points haul in Formula E.
James Barclay, Jaguar TCS Racing Team Principal: “We gave everything to try and win the drivers’ title with Mitch but it was out of reach. We raced all the way into the points and put Stoffel Vandoorne and Mercedes under pressure which is what we set out to do in Seoul. Congratulations to them on their successes after a hard fought season. At Jaguar TCS Racing we can celebrate a season of real highs. The double race win in Rome, winning the first ever races in Jakarta and Seoul, seven podiums and our biggest points haul in Formula E are moments to be proud of. I would like to thank every member of the team, our drivers Mitch, Sam, Norman, Tom and Sacha and our incredible commercial partners for their support. Mitch got to stand on the top step of the podium four times this season and has driven incredibly – he firmly deserves his runner-up place. Our Gen3 campaign has already begun, and we are hungry to go one step further next season.”
Mitch Evans, Jaguar TCS Racing driver #9: “The team should be proud of what we have all achieved. We came up a little short, but it is still a triumph, especially as we took the fight to the last day. We didn’t have the pace in the dry and we didn’t qualify well enough. It does hurt missing out on the last day again but it’s different circumstances this time. We did everything we could, four wins, seven podiums and I’m very proud. Roll on season nine and Gen3 where we’ll be back fighting for the top spot.”
Norman Nato, Jaguar TCS Racing driver #10: “It has been a pleasure to jump in the Jaguar I-TYPE 5 this weekend. It was really unexpected. Qualifying has been a tough one, we’ve been struggling a little but the race was harder than anticipated. I did everything I could but it’s really hard to fight with drivers who have been racing the car for a full season. I have really enjoyed this experience so thanks to everyone at Jaguar TCS Racing.”
Sam Bird, Jaguar TCS Racing driver: “I want to congratulate Mitch and the team for coming runner-up in the Drivers’ World Championship. Everyone at Jaguar TCS Racing has worked so hard all season to give us a fantastic Jaguar I-TYPE 5 and I’m really proud to be a part of this team. This season hasn’t gone so well for me but I’ll come back fighting next season and we’ll be aiming for more.”
Jaguar TCS Racing look forward to the fastest, lightest, most efficient electric race car taking to the streets of Mexico City in January 2023 for the start of season nine and the Gen3 era.

Dubai Customs Represents A Leading Model In Cooperating With Other Countries To ...

The Department of Municipalities and Transportation nominates 33 employees for t ...

Samsung's Trade-in Offers For The Galaxy Z Series Now Available Across The UAE, ...

Torno Subito Welcomes Back Its Third Edition Of ‘Massimo's Friends,' With Chef R ...

For The Ultimate Premium TV Viewing Experience, Look Not Beyond TCL's C835 Mini ...

Top Stars to Compete in Dubai in Spectacular Tennis Extravaganza