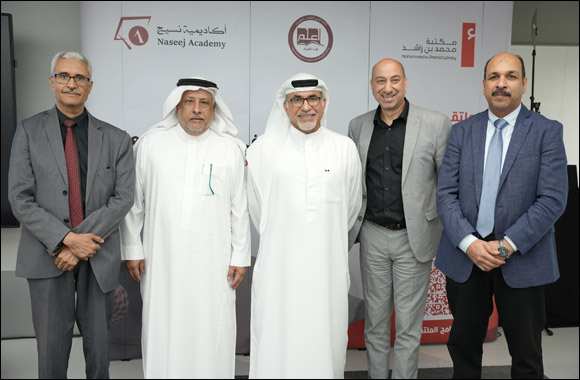 Dubai, UAE, September 23, 2022: As part of its vision to promote the cultural and knowledge sector, Mohammed Bin Rashid Library (MBRL) hosted a seminar titled “Towards an Active Role for Public Libraries in Community Service,” in collaboration with the Arab Federation for Libraries & Information (AFLI) and Naseej Academy. The seminar highlighted the role of public libraries in creating a better future, and ways to enhance this role by leveraging advanced technologies.

The seminar hosted a number of officials, employees, and visitors from different ages and backgrounds, along with prominent speakers and specialists in the libraries sector. These included Prof. Hassan Awad Alsereihy, President of the Arab Federation for Libraries & Information (AFLI); Prof. Emad Essa Saleh, Vice President of AFLI; and Mr. Ayub Khan, Head of Libraries and Cultural Services for Warwickshire County Council, UK.

“Public libraries have seen considerable development, elevating its traditional concept into a wider and more profound vision, in line with the Fourth Industrial Revolution. The sector is leveraging advanced technology to cater for every segment in the society and provide the most convenient library experiences. As a cultural hub and a major drive towards establishing a knowledge-based economy, public libraries are leading knowledge production, dissemination, and efficient utilisation, further bolstering economic development across different sectors,” said Ibrahim Al Hashemi, Member of the Board of Directors at the Mohammed Bin Rashid Al Maktoum Library in his opening remarks.

“The UAE has always been a part of such progress. With the establishment of the Mohammed Bin Rashid Library, our wise leadership has shaped the next generation of libraries locally, regionally, and internationally, equipping it with world-leading library technologies and AI solutions. We have also focused on establishing and promoting cultural and strategic partnerships, in addition to hosting various events, forums, and seminars. All these efforts by MBRL aim to support the vision for the next 50 years, as well as Dubai’s vision to become the happiest and smartest city in the world across all fields and sectors, including public libraries,” Al Hashemi added.

“The Library strives to be a constant leader in hosting initiatives and events, creating unique channels for knowledge exchange in different fields. Accordingly, MBRL supports collaboration with specialised entities and organisations, learning from the best local, regional, and international practices, and innovating leading ideas to support the role of public libraries.” he concluded.

“Libraries in general, and public libraries in particular, face new and growing challenges, especially in the financial and administrative aspects. As such, we see issues mainly related to the interactive and online informational flow, as well as other challenges related to the changing capabilities, needs, and behaviours of the beneficiaries. This is more evident in public libraries, which have a diverse space where the development and diversity of individuals is reflected on society, and in turn on public libraries themselves. This creates a need for constant interaction, especially since such libraries are inclusive and work to meet the needs of everyone,' Prof. Dr. Hassan Al Suraihi

“Public libraries are affected by the successive technological advancements and the changing behaviours and needs of individuals. Therefore, there is a need to focus on the basic concepts again, including the concept of service, which forms the main driver of everything we do in libraries, especially as it places the beneficiary at the centre of attention and work. Accordingly, actions, applications, services, and tangible spaces such as buildings, halls, or even the intangible ones, change and evolve.” Al Suraihi added

“It is important to draw attention to the qualitative transition that public libraries have undergone in recent years, which is reflected in shifting the focus from collections and technologies to focusing on the beneficiaries and their needs and ways to meet them. This is possible by providing co-working spaces for hands-on creative activities, whether they rely on manual skills or utilise technologies such as AI, VR, AR and 3D printers, to create innovative products,” said Prof. Dr. Abdallah H. Metwally, General Supervisor of Naseej Academy

“This has reflected positively on the skills and capacities of the library staff, as they are able to accompany the beneficiaries on their journey to access knowledge, wherever it is and whatever its nature was. This promotes the user experience concept as one of the aspects of studying the beneficiaries, which support the realisation of public libraries' goals.” Metwally concluded

The first session revolved around “User Experience: User is the Centre of Everything.” It discussed user experience as the central part of library experience, which the sector can benefit from by capturing visitors' expectations, as well as actual and expected feedback to eventually encourage them to use digital public libraries and related services.

“The Role of Public Libraries as Co-Working Spaces in Building a Stronger Economic and Social Community” was the topic of the second session. Led by Ayub Khan, Head of Libraries and Cultural Services for Warwickshire County Council, UK, the session highlighted public libraries’ role in supporting a knowledge-based economy and improving inter-community coherence by providing the necessary digital infrastructure, offering education and training opportunities, and developing dedicated programmes to support these goals.

Concluding the seminar, MBRL’s officials offered the speakers and attendants a tour across the Library’s various facilities, services, and libraries, along with a visit to the UAE photography exhibition, a unique journey that recounts the UAE’s cultural, political, and social development over the past fifty years. The guests also visited the Treasures of the Library exhibition, which displays an impressive collection of rare and old books, atlases, and manuscripts, some of which dating back to the 13th century. The visit included a briefing on the Library's dedicated spaces for meetings, lectures, organising сultural and artistic festivals, and hosting local and international film screenings, theatre performances, and music concerts. Additionally, they enjoyed the Garden of Languages, which hosts 60 columns containing dozens of quotes by His Highness Sheikh Mohammed bin Rashid Al Maktoum, translated into more than 170 languages.