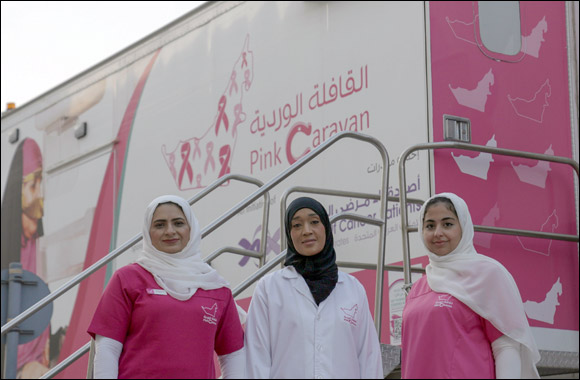 Share Home >> Government, Legal & Humanity
• MoHAP: Early detection of breast cancer increases survival rate to more than 95%
• MoHAP allocates five locations to offer screening tests under medical supervision
• Women urged to early detect cancer to enhance prevention
5th October 2022: The Ministry of Health and Prevention (MoHAP) has launched a national breast cancer awareness campaign to highlight the importance of early detection of breast cancer and prevention methods.
Held under the slogan 'Screen and Reassure Us', the campaign was launched in collaboration with the Friends of Cancer Patients (FoCP) represented by the Pink Caravan and MSD International to mark International Breast Cancer Awareness Month, which is observed in October, according to the World Health Organization.
As part of the national campaign, a 'mammogram' device will be deployed to detect breast cancer in women aged forty and older, particularly those who have not had the test in more than two years.
Clinical exams and mammography will be performed as part of the initiative, in accordance with international standards and guidelines and under the supervision of a qualified medical professional. Additionally, the campaign will foster collaboration and teamwork across all governmental and non-governmental health entities to support MoHAP’s efforts in the fight against breast cancer.
Screening locations
The ministry has designated five locations to conduct screening tests. Women have been screened at the University of Sharjah, Sharjah Mega Mall, Ajman City Center, City Walk Dubai, and the Federal Authority for Identity and Citizenship in Sharjah, with positive cases being referred to the appropriate health authorities for treatment. On the awareness front, the ministry will continue to share informative posts and videos on its social media platforms to emphasize the importance of early breast cancer screening and offer prevention advice.
National Cancer Index
HE Dr. Hussain Abdul Rahman Al Rand, Assistant Undersecretary for the Public Health Sector, stressed the importance of Breast Cancer Awareness Month in realizing the objectives of the National Guidelines for Breast Cancer Screening and Diagnosis. 'The campaign aims to promote healthy lifestyles based on innovative and sustainable methods that ensure the protection of society from diseases; thus, improving the outcomes of the national index to lower cancer mortality rates,'.
Al Rand emphasized that although 80% of breast tumors are benign and non-cancerous, early detection and treatment of breast cancer increases the survival rate to more than 95%.
He invited all members and organizations in the country to engage in the initiative and help battle breast cancer on a large scale by promoting early detection and diagnosis, lauding the directives of H.H. Sheikha Jawaher bint Mohammed Al Qasimi, wife of the Ruler of Sharjah, and Chairperson of the Supreme Council for Family Affairs (SCFA).
Awareness Campaign
For her part, Dr. Buthaina Abdullah bin Balila, Head of the Non-Communicable Disease Department, clarified that the annual breast cancer awareness campaign taking place in October includes a package of awareness initiatives that will be implemented in various governmental bodies to promote early diagnosis and detection of breast cancer.
Bin Balila underscored that the campaign is primarily meant to educate community members about disease detection and diagnosis as well as the procedures to follow when symptoms appear in order to build a society that is aware of the dangers of this disease and how to prevent it.
She went on to say that the National Guidelines for Breast Cancer Screening and Diagnosis adheres to international best practices. 'Through this campaign, we look forward to increasing breast cancer early detection and diagnosis to provide patients with comprehensive care,' she said, adding that the Pink Caravan services have been provided around the country.
Breast cancer is one of the most common diseases, and a leading cause of death worldwide, accounting for 11.6% of cancer deaths in 2019, according to the statistics of the National Cancer Registry (NCR).
Ends