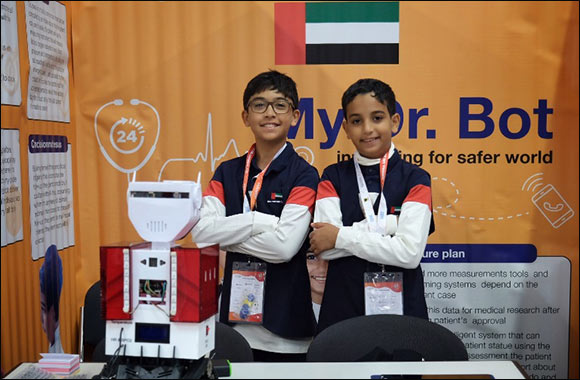 Share Home >> Entertainment
• Nine UAE teams represented the UAE in WRO International Final 2022
• UAE represented among head judges committee
Abu Dhabi, UAE- 25, November 2022:  Abu Dhabi Department of Education and Knowledge (ADEK) congratulates the nine teams who represented the UAE in the World Robot Olympiad 2022 final which was held 17-19 November in Dortmund Germany under the theme ‘My Robot, My Friend’.
The annual competition aims to enhance students’ STEM skills, creativity, and problem solving, inspiring a future generation of scientists, engineers, and inventors from around the world.
The UAE teams competed against the international teams that represents 73 countries in the international competition to showcase various ways of how robots can interact with and help humans. The nine UAE teams, selected following the national qualifier stage hosted by ADEK, took part in the world final across four categories: Future Innovators, Future Engineers, RoboMission, and RoboSports.
• Future Innovators Category: all UAE participating teams won silver medals for their efforts and achievements.
o The UAE Future Coders team won 7th place in elementary sub-category for their healthcare robot.
o The Pioneers team won 8th place in junior sub-category for their sensory robot.
o The Smart Emergency Team won 10th place in senior sub-category for their Smart Emergency Station.
• Future Engineers Category:
o The Apollo team won 6th place for their autonomous robot.
• RoboMission Category: all UAE participating teams won bronze medals for their efforts and achievements.
o The Storm Troopers team in elementary sub-category
o The RBH Junior Team in junior sub-category
o The Khofakkan Robomission team in senior sub-category
o The Team Azza in senior sub-category
• RoboSports Category:
o The Digital Robot team came in 23rd place for their autonomous robots in the robot tennis challenge playing doubles in a match against other teams.
The UAE participation in the World Robot Olympiad International 2022 Final was not limited to its talented teams as ADEK’s Klaithem Alneyadi who served as a head judge at the international event for the fourth year.
“This year’s competition was especially unique for our team, as it came after two years of online participation,” said Alneyadi. “We are proud of our teams and their great achievements across all categories. Their performance at the qualifier and international event is a testament of our joint efforts in promoting STEM skills, robotics, AI, and coding among young generations. The innovative skills and creativity that our teams showed encourages us to support more students to realize their full potential in these areas of knowledge.”
Fatima Al Zaabi, WRO Program Manager at ADEK also added “We are proud of the ongoing success that our UAE teams continue to achieve at the World Robot Olympiad finals. The great turnout that we see every year in the national qualifier is translated into the remarkable successes that our teams achieve in the international event. We are looking forward for more successes in next year’s competition”
For the 14th year in a row, ADEK led the UAE participation in WRO, starting with the national qualifiers where ADEK invited all public, private, and charter schools, as well as universities, to take part in the UAE qualifiers. The national qualifiers saw the participation of 1,800 students across 512 teams including 402 teams from public and private schools, 34 teams from charter schools, and 76 teams from other institutions such as universities, centers and companies.